When we say that the Lord Jesus’ death was “voluntary”, we do not mean that He alone made the decision to die, without reference to any other being. On the contrary, the Scriptures make it very clear that it was the will of the Father that He should die. However, He was fully obedient to the Father’s will; indeed, He delighted in it. One passage that shows this is Hebrews 10:6, 7, quoting from Psalm 40:6-8: “In burnt offerings and sacrifices for sin Thou hast had no pleasure. Then said I, Lo, I come (in the volume of the book it is written of me,) to do Thy will, O God.” He said, “My meat is to do the will of Him that sent Me, and to finish His work” (John 4:34).

In stating that His death was voluntary, we mean that it contrasts with the death of every other human being for whom death is inevitable. “By one man sin entered into the world, and death by sin; and so death passed upon all men, for that all have sinned” (Rom 5:12). We all have no choice – we cannot avoid death – eventually,

it catches up with everyone. Even a person who commits suicide is not dying voluntarily, he is just bringing his death earlier than God intended it to be.

Not so for our Lord Jesus Christ. He is without sin; death never had any claim upon Him. He could, if it had been God’s will, have come into this world, lived here thousands of years, and the processes in our bodies that lead inexorably to our demise would never even have begun to work in Him. And, try as they might, His many enemies could never have killed Him, except it were God’s purpose for them to do so.

We will do little more than quote some Scriptures that show the voluntary character of His death. It is seen in:

Centuries before He came, Isaiah wrote: “He is brought as a lamb to the slaughter, and as a sheep before her shearers is dumb, so He openeth not His mouth” (53:7). Acts 8:32 shows that this was prophesying of the submission He would show when He was taken to die. He Himself said, “I lay down my life, that I might take it again. No man taketh it from Me, but I lay it down of Myself. I have power to lay it down, and I have power to take it again. This commandment have I received of My Father” (John 10:17,18). He stated that His death was the very purpose for which He came: “For even the Son of man came not to be ministered unto, but to minister, and to give His life a ransom for many” (Mark 10:45).

On the mount of transfiguration, the Lord Jesus, with Moses and Elijah, “spake of His decease which He should accomplish at Jerusalem” (Luke 9:31). This decease, or departure, was not a disaster or an unforeseen event, but it was something that he was going to “accomplish.”

The records in the Gospels indicate that there was an exact time when He was to die. We read several times in John that His “hour” had “not yet come.” For example, “Then they sought to take Him: but no man laid hands on Him, because His hour was not yet come” (John 7:30).

The accuracy of the divine program for the death of Christ can be seen by an examination of the timeline indicated in Daniel 9:24-27, which, as Sir Robert Anderson has shown in his book The Coming Prince, pinpointed the week of the Lord’s death, hundreds of years before it took place. Certainly those wicked people who were involved did not choose that week in order to willingly fulfill divine prophecy concerning the Messiah!

There were those who acted to try to bring about the death of the Lord Jesus, but their efforts were in vain. Before His time came, we read of those who tried to kill Him, but did not succeed (for example, at the hill in Nazareth, Luke 4:28-30). There were also those who came after the appointed time, with a view to taking His life away – the soldiers came to break His legs, in order to hasten His death, but found that He was dead already (John 19:33).

His own final act upon the cross indicates the voluntary nature of His death: “When Jesus therefore had received the vinegar, He said, ‘It is finished:’ and He bowed his head, and gave up the ghost” (John 19:30). It was not a case of His life gradually slipping away – at exactly the right time, He voluntarily dismissed His spirit.

Though His death was voluntary, and men could never have killed Him had God not permitted it, this in no way clears those who were involved in plotting and carrying out His death; nor does it even mitigate their crime. Peter told the crowd at Pentecost: “Him, being delivered by the determinate counsel and foreknowledge of God, ye have taken, and by wicked hands have crucified and slain” (Acts 2:23). In verse 15 of the following chapter he accused them of having “killed the Prince of life.” Paul writes that they “killed the Lord Jesus” (1Thes 2:15). They stand every bit as guilty as if they had been able to do it without divine permission.

How thankful we are that that Blessed One willingly went to the cross and died for us. 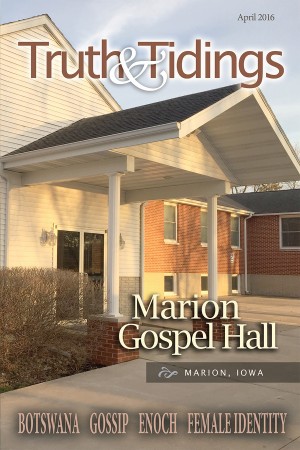