Many consider this hymn, from the man known as the “Father of English hymnody,” to be the greatest hymn ever written in the English language. The hymn was originally titled Crucifixion to the World by the Cross of Christ. The inspiration for it is said to have come from Galatians 6:14: “But God forbid that I should glory, save in the cross of our Lord Jesus Christ, by whom the world is crucified unto me, and I unto the world.”

It was written in 1707, to be used in a Sunday morning worship service. Still sung today by many Christians, these words continue to stir hearts. Whether sung by companies of the Lord’s people around a simple table of remembrance, or by a group of young folks around a piano at a hymn sing, the words still grip our souls.

Isaac Watts was never physically healthy. He was plagued by numerous medical issues from his birth in 1674, and he nearly died of smallpox in his early teens. He was a diminutive man, only five feet tall. When he was 38, he experienced a a terrible fever, with lasting effects from which he never fully recovered, and he lived his last 36 years as an invalid. The one love of his life was Elizabeth Singer, whom he longed to marry. She turned him down, saying that “while she loved the jewel of his excellent mind, she could not admire the casket that contained it.”

A brilliant mind was his. He learned Latin by age 5, Greek by 9, French by 11, and Hebrew by age 12. He was saved by God’s grace at age 15, and developed into both a remarkable student of Scripture and an able public preacher of God’s Word. He preached his first message when he was 24, but had already written many sound and devotional hymns. As a teenager, he became dissatisfied with the poor spiritual content of the hymns of the day. He voiced to many his opinion that the hymns of the day did not inspire believers, either to genuine worship or to holy living.

Complaining of the current hymns one day to his father, he was encouraged, “Well then, give us something better, young man!” He immediately got to work. With the thoughts of devotion that had occupied his soul, that night, for the first time, one of his hymns was sung in the evening meeting. It was a hymn commencing with these words: Behold the glories of the Lamb, amidst the Father’s throne.

The wonderful thoughts expressed by his pen sprang from the devotion of his heart. From all accounts he was a deeply devotional Christian. Like the apostle Paul, he never married, but instead, threw his heart fully into the things of the Lord.

Isaac Watts preached for years in London, seeing many souls saved, and building up the saints of God in their faith. In spite of his physical limitations, he labored for years for the Lord Who had saved him.

In 1700, his own brother Enoch, had written him a personal letter, imploring him to publish some of the hymns he had already written.

“Dear brother … in your last letter, you mentioned an inclination to oblige the world by showing it your hymns in print, and I heartily wish … that you were something more than inclinable thereunto … There is … a great need of a pen, vigorous and lively as yours, to quicken and revive the dying devotion of the age … . Yours now is the old truth, stripped of its ragged ornaments, and appears, if we may say so, younger by ages.”

His first collection of hymns was published in 1707. He sold the copyright to Mr. Lawrence, the publisher, for 10 pounds. It was an instant and huge success. It was enlarged and republished in 1709. When I Survey the Wondrous Cross was included in his first hymn collection.

When I survey the wondrous cross
on which the Prince of Glory died,
My richest gain I count but loss,
and pour contempt on all my pride.

Forbid it, Lord, that I should boast,
save in the death of Christ, my God;
All the vain things that charm me most,
I sacrifice them to His blood.

See from His head, His hands, His feet,
sorrow and love flow mingled down;
Did e’er such love and sorrow meet,
or thorns compose so rich a crown?

Were the whole realm of nature mine,
that were a present far too small;
Love so amazing, so divine,
demands my soul, my life, my all.

Charles Wesley, who himself wrote over 6,500 hymns, reportedly said of this hymn that he would rather have written this one than all of his own hymns. Isaac Watts wrote over 600 hymns, and this remains his best.

Lessons may be learned from this life and from this hymn. Devotion to the Lord Jesus Christ at an early age is still the best of pursuits by every one of us. Living as devotional Christians seems to be a “lost art” among many believers today.

In addition, these timeless words were written by a young man who had many painful and bitter circumstances in his life. They did not conquer him, but he them. He rose above the sorrows and pain of his life, and “passing throught the valley,” He left us “a well” (Psa 84:6).

Finally, who among us has NOT been convicted by these words, even as we sang them? Do we offer our all to the Master, as Watts has written? The same God Who saved him saved us. Yet, we do not generally live our lives as if we had been crucified to a dying world. We have largely failed to understand the emptiness of the “vain things” of which he wrote. May the Lord stir our hearts and souls to live our lives alone to the cross of our Lord Jesus Christ.

Isaac Watts also wrote this chorus, an apt summary of the thoughts of this wonderful hymn:

His dying crimson, like a robe,
spreads o’er His body, on the tree;
Then am I dead to all the globe,
and all the globe is dead to me. 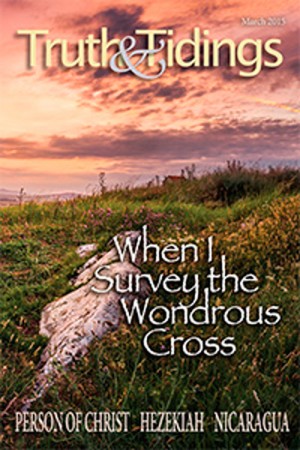