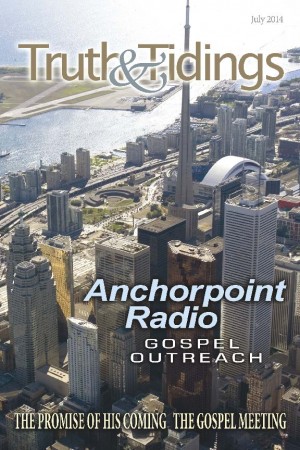 In the past couple of articles, we have looked together at the basis for the virgin birth in the Old Testament, and the record of it in the New Testament. The purpose of this month’s article is to summarize the uniqueness of this great event. It is a bridging article, as it will refer back to some of the issues we have already looked at, while anticipating points that will be considered in future months, Lord willing.

Here, briefly, are six ways in which the coming of our Lord Jesus Christ was different from that of every other person.

Every one of us came into existence at the time of conception. That was not so for Him. As we have already seen, He is eternal; He never had a beginning.

For all of us, our appearance in this world was totally outside our control. We became part of the “human race” involuntarily. It was altogether different for our Lord Jesus Christ. Hebrews 2:14 summarizes it succinctly: “Forasmuch then as the children are partakers of flesh and blood, He also Himself likewise took part of the same.” We became “partakers” of flesh and blood; not of our own knowledge or choice. He, knowingly and willingly, “took part of the same.”

There were people whose births were foretold, such as Isaac, Samson, and John the Baptist. But none of their cases can compare with the quantity (or the variety) of the prophecies made regarding the birth of the Lord Jesus, nor to the length of time between the making of the prophecies and their fulfilment. We have already looked at the Old Testament prophecies of the virgin birth. But there are many others concerning His coming. For example, where He would be born was foretold in Micah 5:2, written some 700 years before the event: “But thou, Bethlehem Ephratah, though thou be little among the thousands of Judah, yet out of thee shall He come forth unto Me that is to be ruler in Israel.” And there are so many other prophecies concerning His birth.

As we know only too well, every one of us, descended from Adam, is born with a sinful nature. How different it is for the Lord Jesus Christ, born of a virgin, as we have already seen. The word “holy,” as used of Him by the angel in Luke 1:35, is true of Him alone.

How do people come into the world? The Scripture record is clear. Adam was created by God, from the dust of the ground (Gen 2:7) and Eve was made from Adam (Gen 2:21-23). Each of these was a unique event. From then on, with one exception, all the billions of human beings who have ever lived have come as the offspring of their parents, a process that began with the birth of Adam and Eve’s children.

Who is the one exception? It is, of course, our blessed Lord Jesus Christ. He came, not by creation (Adam), nor by formation (Eve), nor by generation (everyone else), but by the Incarnation. “And without controversy great is the mystery of godliness: God was manifest in the flesh” (1Tim 3:16). “The Word was made flesh, and dwelt among us” (John 1:14).

There are records in the Scriptures of people, the purpose of whose birth was clearly stated, sometimes even before they were born. John the Baptist is an evident example in what was said before his birth (Luke 1:16, 17) and shortly after it (Luke 1:76-79). But the purpose for which the Lord Jesus came was unique.

He was “made a little lower than the angels … that He by the grace of God should taste death for every man” (Heb 2:9). There is no doubt as to this. The reason He became a man was in order that He might die for everyone.

His birth was also with a view to the blessed result of His death: “But when the fullness of the time was come, God sent forth His Son, made of a woman, made under the law, To redeem them that were under the law, that we might receive the adoption of sons” (Gal 4:4-5). His coming was so that through His death, we might have the blessings of redemption, being placed as sons, and so much more. In the context, this passage is speaking of those of a Jewish background, but the Scriptures make it clear that these blessings are not restricted to them.

His birth was not only with a view to what He has already done for us, but what He continues to do in the present: “Wherefore in all things it behoved Him to be made like unto His brethren, that He might be a merciful and faithful high priest in things pertaining to God” (Heb 2:17; see Heb 4:15, which also links His suitability for priesthood with His experience of humanity). That He might be our Great High Priest, it was necessary for Him to become a man.

Hebrews 2:5-10 shows that God’s purposes for the future are also dependent on the humanity of His Son. The coming age is not to be in subjection to angels, but to a man. And there is only one Man Who can fulfil that; our Lord Jesus Christ.

Thus the coming of the Lord Jesus was unique in its purpose: that He might die, provide salvation, be our High Priest, and be the One under Whom God will place the whole of creation.

Truly the birth of the Lord Jesus Christ is an event unparalleled in history. Nothing like it had ever happened before, nor will ever happen again. We marvel at it, and we will be eternally grateful for it.