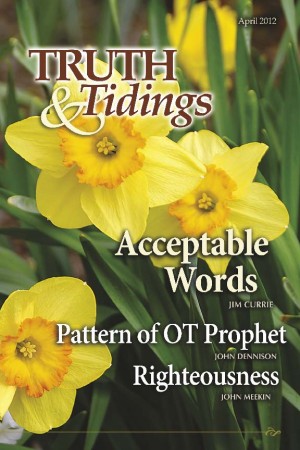 Everyone is aware of the fact that the social atmosphere for the preaching of the gospel has changed drastically in the years since the end of World War II. In earlier times, it was common for most people to have respect for the Bible and for those who preached it. Not only so, but to some degree, a basic knowledge was also prevalent. No longer do these conditions prevail. The gospel preacher who seeks to reach people in their homes or in situations removed from the “Gospel Hall,” finds himself confronted, more often than not, by those who neither understand the subject of what he preaches nor the words commonly used to set it forth.

The twelfth chapter of Ecclesiastes shows that, in any age, “acceptable words” are always the tools of the wise preacher. These “acceptable words” are, first of all, “words of truth” (v10). That is to say, the content of the gospel never changes to suit the prevailing conditions in society. Nevertheless, “the preacher … gave good heed, and sought out, and set in order many proverbs.” These “proverbs” are “the acceptable words and that which was written” of verse 10. The herald of the gospel, whether in public or in private, will, with diligence, give heed to those things that are relevant to the needs of his audience. The “proverbs” in this context were likely wise sayings widely known by the people of the day. The preacher sought ways to set these things forth so that they were clearly understood in the light of “that which was written.” He “set them forth in order.” The material he used was “that which was written … even words of truth.” His approach was contemporary, his method orderly, his words were clear and understandable, and, above all, it was an explanation of “the written Word.” Such relevant, understandable, and Bible-based preaching will, under God, “be as goads (to the conscience) and as nails fastened by the master of assemblies,” giving assurance to all who, in humility of heart, accept them by simple faith. It is worthy of notice that these “masters of assemblies” are given by “one shepherd.” This implies, no doubt, that they are under His control.

Our problem today is to find acceptable words and to do so within the bounds of Holy Scripture. Some, facing this dilemma, have turned to translations of God’s Word which are far from honoring to Him and, at worst, obscure or corrupt the very gospel we are called upon to preach. It is most unwise to turn to that which might weaken the truth of the gospel in order to obtain clarity of speech; nor is it necessary.

Years of dealing with people who are basically agnostic and almost completely ignorant of anything Scriptural have shown that we do need to define our terms while maintaining the integrity of the message. When quoting words such as “In Whom we have redemption through His blood, even the forgiveness of sins,” we need to pause and explain what we have just said. Many of our listeners today will not appreciate that redemption means to “buy back by paying the price,” nor will they know that “through His blood” refers to the death of our Lord Jesus Christ on the cross. Even a bare reference to “Calvary” might leave some people wondering what, or where, that is. The situation could demand an enlargement which would show Calvary to be the place “outside Jerusalem where Jesus Christ was nailed to a cross 2,000 years ago.” To speak of being “justified by faith through our Lord Jesus Christ” will also, in many instances, call for an explanation. The word, “justification” will, more than likely, conjure up in the mind of the hearer a function of a computer or a word processor. That function might easily be used to show that through personal faith in a crucified Christ, the believer is “lined up” in harmony with the perfect righteousness of God. In actual fact, however, it is closer to the mark to explain “justification” as a legal term which, in Biblical language, means the sinner, pronounced guilty by the Judge of all the earth, is set free upon believing in Christ because of His death as a substitute, and in perfect accord with the righteous and holy character of the Judge. To seek out “acceptable words” in this way is to break down the Words of Truth to their simplest form so that wayfaring men though fools, need not go astray (Isa 35:8).

Further, it is often necessary to take a step back from our usual “John 3” approach to making the gospel known. The reason for this is that many today, because of educational backgrounds and other factors, are far from being convinced that there is a God. Intellectually, at least, this is what they profess. To such, the fact that God loved the world of men so much as to give His only begotten Son is to beg the fundamental question, “Is there a God or not?” It will be found that Paul’s preaching in Athens, as recorded in Acts 17, or his masterful summing up of the culpability of the heathen (Romans chapter 1), will prove more suitable material to use when talking to those who are being approached for the first time, either collectively or individually. While Paul’s gospel remained ever the same, his approach to the Jews who knew the Scriptures (Acts 13) was different from his approach in Acts 17 when he spoke to the Athenians who were given over to idolatrous religion or empty philosophy.

One further important point must be stressed. A mere reliance on “clarity of speech” or cleverness of argument will never win souls to Christ. It is our responsibility to make known the gospel faithfully and in language that is both Biblical and as clear as words can make it; but in the end, a complete dependence upon the Holy Spirit of God to convict and convert is our only recourse for, “Salvation is of the Lord.”