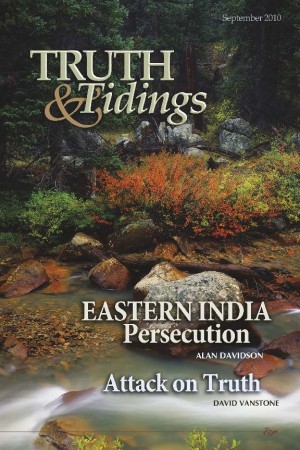 Relativism is a belief system that denies the existence of objective absolute truth. If truth does exist, it cannot be known and used as an objective standard. Or, if truth exists and can be known, it is not a universal standard that I am obligated to accept as my basis of conviction.

Relativism is evident in the following example. Let’s say you were explaining the truth of the gospel to someone and he responded by saying “That may be your truth, but it is not my truth.” Or, “That may be fine for you, but it’s not for me.” Those statements are really saying that truth is relative to the individual. It is a product of subjective preferences rather than an established body of truth. Again, let’s say a friend tells you that she and her boyfriend are living together and have no immediate intention of getting married. When you begin to explain from the Bible that two people should be living together only if they are married, she replies that they love each other and that they’re good with their arrangement. Society accepts it. She is not prepared to accept that there is an absolute standard for morality. If it exists, it certainly isn’t for her. “By the way, what right do you have imposing your belief on me?” Relativism!

Relativism effectively dominates thinking in the western world through the controlling influence of the god of this world (2 Cor 4:4). It has become a pervasive force in society – the enemy of truth in our day. It is opposed to what Scripture testifies about itself. “Forever, O Lord, Thy Word is settled in heaven” (Psa 119:89).

A Christian can use the objector’s own relativism as a tool against relativism. “Casting down imaginations, and every high thing that exalteth itself against the knowledge of God, and bringing into captivity every thought to the obedience of Christ” (2Cor 10:5).

Sadly, relativism has gained a foothold among evangelicals through a loose network known as the “emerging church.” Generally speaking, participants cross theological boundaries to engage in very open ecumenical thinking. They refer to living their faith as a conversation. This terminology emphasizes interfaith dialogue. Often, the truths of God’s Word are reduced to symbolism. They are to be understood with contemporary thought in an ever-changing culture. As a result, the authority, inerrancy, and inspiration of Scripture are sidelined.

Relativism at its source is a revolt against the objective reality of God. The existence of God is the ultimate standard of truth. His eternal nature is connected to His absolute truth. James 2:10 says “For whosoever shall keep the whole law, and yet offend in one point, he is guilty of all.” Because God gave all the law, a person offending in one point is guilty of all. To reject His law is to rebel against Him. Relativism is a devious rebellion. It does not openly battle truth in the streets, but it subtly ignores its binding demands. It is little wonder that the prevalence of relativism today coincides with an increasing rejection of God and of Christianity.

To say that there is no universal absolute truth is to deny Him Who said without qualification “I am the truth”(John 14:6). And surely the person of Jesus Christ must stand together with His testimony in the written Word. It is said of Christ, “In the beginning was the Word, and the Word was with God, and the Word was God … And the Word was made flesh, and dwelt among us, (and we beheld His glory, the glory as of the only begotten of the Father) full of grace and truth” (John 1:1, 2, 14). These words of Scripture teach us that through the incarnation of Christ the nature and truth of God can be understood. He has revealed the Father along with the timeless truths connected with His eternal nature.

Relativism and the Gospel

One of the claims of relativism is that it sets people free from the restrictive shackles connected with belief in absolute truth. Liberated, they can establish in their own minds a comfortable concept of reality. Ironically, the exact opposite is true. In John 8:32 Jesus said “Ye shall know the truth, and the truth shall make you free.” It is sin that enslaves and people are not freed from sin through the fog of relativism. Let’s not pretend. A description of people who will be lost forever because they were deceived into not loving the truth that they might be saved is found in 2 Thessalonians 2:10.

There is hardly anything that evokes such a strong negative reaction as to say “I know the truth.” Certainty may be expected in mathematics but not in matters of faith and morality. To speak with conviction is considered arrogant. As Christians, we are in a socially awkward position. We claim to know both the truth and that the truth is applicable to all people of all time. We believe that the truth is centered in Christ and that His saving death holds eternal blessing for all. Furthermore, we believe that our Lord has commanded us to go and preach the gospel.

However, when we tell people that they need our Savior it often fuels their indignation. Their reaction, spoken or otherwise, may be “How dare you stuff your religion down my throat? Remember that my truth is just as valid as your truth.” After all, the wisdom of relativism is summarized by the cardinal virtue of tolerance. To imply that someone is wrong is considered to be terribly intolerant.

This environment makes evangelism very unpopular and difficult. If we are to honor our Lord in fulfilling His commission I suggest a three-fold approach. Firstly, we must immerse ourselves in the Word of God for a stable God-given perspective. This will keep us from being carried about with every wind of doctrine. Secondly, knowing how offensive our message may seem to some, let us pray for courage to move forward with every opportunity and not to retreat because of cowardice. Finally, let us seek grace from the Lord to be sensitive to people so as to not add to the offense of the cross through our own lack of humility.

The danger of relativism, as with all evils in the world, is that it influences us even if we are not aware of it. We therefore need the continual sanctifying effect of God’s Word in our lives. Relativism has the eroding effect of reducing the impact of the Bible in our lives. If we are not careful, the roles are reversed and we try to fit God’s Word to our lives instead of allowing the Word to bring us into conformity to its standard. When that happens, its power in us is seriously restricted.

Psalm 119 uses beautiful metaphors to highlight the powerful effects of the Holy Scriptures in a life where it is allowed to work. It is a fountain for daily cleansing. “Wherewithal shall a young man cleanse his way? by taking heed thereto according to Thy Word” (v 9). It is honey for personal enjoyment. “How sweet are Thy words unto my taste! yea, sweeter than honey to my mouth!” (v 103). It is a light to give guidance and understanding. “Thy Word is a lamp unto my feet, and a light unto my path” (v 105).

The truth holds us in Christ. The danger for those who accept/embrace/imbibe relativisim is to forget that truth is not a cold, abstract principle, but a person of infinite love and grace. Those who deny absolute truth fail to experience the warmth of His embrace, the smile of His forgiveness, the loving eye of His chastening, and the firm hand of His leading. May we never remain satisfied with an abstract principle and, in doing so, miss Him too.