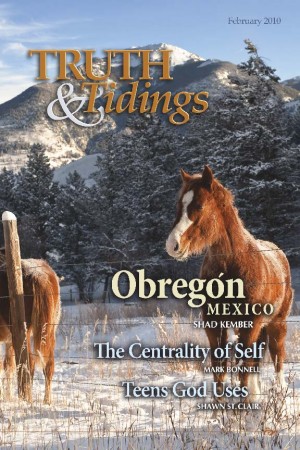 It’s real bad. But people are more concerned about the world’s melting ice, disappearing glaciers, evaporating lakes and vanishing species. Geophysicists, biologists, and politicians are worried about the physical condition of our planet.

But there is a more pressing concern – a more immediate danger with far greater consequences. The situation is irreversible. The only option is a dramatic rescue.

Paul wrote to the Galatian believers with a heavy heart over the potential impact of the world on the child of God. His primary burden for the Galatians was the religious world. Sinister forces were at work to discredit the absolute sufficiency of the work of Christ to save sinners. So Paul writes: “Grace to you and peace from God our Father and the Lord Jesus Christ, who gave Himself for our sins to deliver us from the present evil age, according to the will of our God and Father, to Whom be the glory forever and ever. Amen. (Gal 1:3-5 ESV).

The KJV says: “this present evil world,” But Paul wasn’t writing about the demise of the planet. He was targeting all spheres of society – its ideas, opinions, priorities, aspirations and standards. Religion, politics, government, entertainment, education, finances, arts, sports: all that is owned, produced, influenced, managed, and experienced by 6.6 billion people on this planet, apart from God. The “god of this age” is Satan himself (2 Cor 4:4).

How bad is it? “Eat your supper dear and get your homework done. Before you go to bed you can just relax by chilling on the couch and watching some television. But two hours is the maximum, 7 PM to 9 PM, and then off to bed you go.”

In those two hours, in fact during the first hour (7 PM to 8 PM), do you know what they’ll see? Every 3.5 minutes they will see violence, profanity and/or sexual content. In 2006-2007, 90% of the 208 television shows reviewed contained objectionable content during those “innocent” family hours of safe viewing. Over the past five years, sexual content has increased 22% and violent content is up 52% during those safe two hours.

One very well known network increased its sexual content by 579% for those two safe hours over the past five years. From 7 – 9 PM children can see, not only suggestive sex scenes, but explicit ones.

There’s nothing innocent about the present evil age. Joining its pursuits or relaxing to enjoy its productions is reckless. The more we can shield ourselves, our families, and our homes, the more we will be preserved and the Lord will be honored.

We have been delivered, we have been literally “rescued out of” the darkness of life without God which characterizes the present evil age. He didn’t rescue us from the planet yet – we’re to stay here as lights in a dark age to rescue others.

“Preserve us Lord from dabbling in the things of this age that have the grimy fingerprints of sin all over them. Preserve us from introducing our children to something they will want to take even further to their own detriment.”