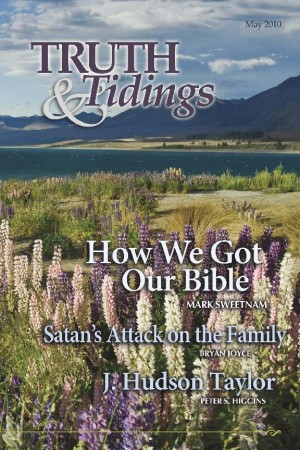 In June of 1849, a mother traveling away from home felt a great burden to pray for the soul of her oldest son. Finding a quiet place, she spent hours beseeching the throne of grace for his conversion. Some 70 miles away, James Hudson Taylor finished reading a tract, and took in the truth of salvation while contemplating the Lord’s cry upon the cross, “It is finished.” Two weeks later, Amelia Taylor returned home to her son, who was amazed to learn that she already knew of the work of God in his soul.

In the book, J. Hudson Taylor – God’s Man in China, Dr. and Mrs. Howard Taylor provide a revealing and compelling look at the life of a man greatly used by God. The book describes Hudson Taylor’s formative years as a young child, his conversion as a teenager, his growing burden for the people of China, his years of preparation gaining medical knowledge as a chemist’s assistant, and his call to the distant land of China.

On the 9th of September, 1853, the ship Dumfries departed Liverpool, England, bound for Shanghai, carrying the valuable cargo of the 21-year-old Taylor, who would bring the gospel to inland China. In the 1850s, the population of China was 430 million souls, most of whom had never heard the gospel. Active missionary work was present in the major port cities of the country, but the vastness of the land, enormity of the population, and complexity of the social structure, were barriers preventing the further spread of the gospel.

On March 1, 1854, Hudson Taylor arrived in Shanghai for the first time. He was a man to be uniquely used by God to carry the gospel into the heart of China. In this great task, the Lord provided for him, first of all, a godly wife, Maria, whom he met in Ningpo, then, a seasoned missionary in William Burns, who provided guidance and encouragement, and finally a dedicated friend named Samuel Berger, who provided support and organization from distant London. With Nehemiah-like vision, Hudson Taylor planned for the spread of the gospel throughout the land of China. With Pauline humility, he adopted Chinese dress and the queue hairstyle, so that he might gain an opening with the Chinese people. With Abraham-like dependence he looked to the Lord to provide the hundreds of workers that would be needed to bring the gospel to the heart of China. Through hardship, trial, and times of loss, Hudson Taylor is seen as a man focused on spreading the gospel for the glory of God and for the good of lost souls.

For the reader who finds that Dr. and Mrs. Howard Taylor’s book has only whet the appetite of interest in the subject of the Lord’s work in China, there are many other books to which this account would serve well as a starting point. In the larger books,Hudson Taylor – The Growth of a Soul and Hudson Taylor – The Growth of a Work of God, the personal thoughts and devotions of Hudson Taylor are detailed in a more comprehensive manner. To those curious about the work of native-born believers in China, the account of Pastor Hsi, Confucian Scholar & Christian, will provide great insight. For others interested in reading how the news of Hudson Taylor’s work impacted a rising generation in Great Britain, The Cambridge Seven is a fascinating story of seven collegians who were stirred to forsake earthly gain and instead serve the Lord on the mission field.

Dr. and Mrs. Howard Taylor relate an experience that Hudson Taylor shared while speaking at the Perth conference in Scotland. He spoke of a man named Nyi, who, with great joy in salvation, asked “How long have you known this good news in your country?” Taylor responded that it had been known for hundreds of years. To this Nyi responded in shock: “Hundreds of years and you never came to tell us! My father sought the Truth and died without finding it. Oh, why did you not come sooner?” Hearing such accounts from the experience of Hudson Taylor will cause the reader to consider the similar conditions found in China and to ponder the reality of souls searching for truth today.