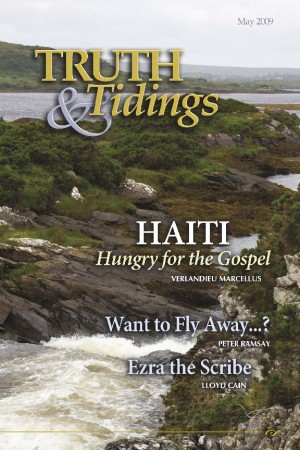 Because Thou Hast Done This

What to Fly Away from it all with Doves Wings

Study to Show Thyself Approved: Studying the Book of Ezra

The Servant Mind: Christ – The Pattern of my Life

Go Ye Into All the World: Ciudad del Carmen

A Glimpse of Family Life in Jesus’ Earthly Home (2)

Look on the Fields: Haiti

Gospel: What’s in a Name?

Darkness, spiritual darkness, inundated the streets of Jerusalem, saturated the hearts of its inhabitants, and dramatically impacted the lifestyle of its citizens. It was something that “men loved.” In that same city approximately 60 years after the people there had “crucified and slain” and “killed the Prince of Life,” Paul arose before king Agrippa and shared the Lord’s purpose for him in preaching the gospel: “To open their eyes, and to turn them from darkness to light” (Acts 26:18).

Centuries have passed, generations have since vanished in time, events that will forever mark history have taken place and yet, what was so prevalent in Jerusalem has never changed. Down through the ages, this love of darkness has made its way to an island located in the Gulf of Mexico, Ciudad del Carmen. This is a city where darkness is no longer a visitor. It has fostered a city filled with blind Bartimeuses, generated women who imitate the Samaritan way of life, and artfully oppressed young men into the practices of Sodom. Sadly, for these souls, their only hope is “the mist of darkness … reserved forever” (2 Pet 2:17), unless they hear the gospel of the Lord Jesus.
The Lord’s goodness has been displayed by allowing the gospel to reach this city. It was a privilege to arrive for a week in April of 2007, to what is also known as the “Pearl of the Gulf.” With an elder from my home assembly, contacts of a brother in Iowa were visited. Upon our arrival, we were touched by the prevalent idolatry. Amidst the religious opposition we found some who wanted to hear the gospel. The following August, the Lord gave us another opportunity to return for a week. Fishermen opened their homes for the message of salvation to be preached. The Spirit of God began to work in their hearts, resulting in people professing to be saved.

Interest among these people encouraged us to hold a Seed Sowers distribution and a series of gospel meetings commenced. We appreciate the help given by young people from North America and Venezuela during this effort. At that time, the gospel was preached for fifteen weeks and many trusted Christ as Savior. It was a privilege to witness the convicting power of the gospel.

A middle-aged man who attended the meetings had spent a lifetime wasting the success of his businesses on alcohol, risking his marriage. After receiving salvation, he showed a desire to follow the Lord and is now a responsible brother in the assembly here in Ciudad del Carmen. Others who professed “turned to God from idols (1 Thess 1:9), and some left behind immoral behavior. Several of these people who professed obeyed the Lord in baptism over a period of three months. We are thankful for the work of the Holy Spirit being made evident in transforming lives. “If any man be in Christ, he is a new creature: old things are passed away” (2 Cor 5:17).

Three weeks after the first series of meetings ended, a group of young people were encouraged to come and help with the distribution of gospel texts and preaching of the gospel. It was a blessing for the group to see God continuing to work in the hearts of the people here. Once again, many were saved and baptized. We were continually reminded that “thy God, He is God, the faithful God” (Deut 7:9). A man that was saved during the meetings here in Ciudad del Carmen, took us to visit his relatives in remote fishing villages in the neighboring state of Tabasco. At that time, a nearby town, Candelaria, was also visited. There was much interest shown during the two gospel meetings held there. We would desire to see works established in these places.

Through the course of those six months, various brethren came to help with teaching for the new believers. It was encouraging to see them submit to the Word of God. After learning of the Lord’s desire to gather His people unto Him, in July of 2008, a number of believers gathered together for the first time to participate in the Lord’s Supper. We are thankful for the spiritual development shown in the lives of the believers and for their involvement in the activities of the assembly.

Last December, another Seed Sowers distribution was held and another series of meetings in the Caracol hall commenced. With the island being covered with texts before, we decided to distribute only to half of the city, but focus more on doing door to door in the communities surrounding the hall. The gospel meetings are continuing with good numbers attending and several professing faith in the Lord Jesus. It is encouraging to see that the newly saved are showing a desire to live for the Lord. Also, the believers in the assembly have helped in many ways during this series of meetings.

Considering what the Lord has done, we “give thanks unto the Lord, for He is good” (Ps 107:1), and our desire is that “the King eternal, immortal, invisible, the only wise God [receive] honor and glory for ever and ever” (1 Tim 1:17).