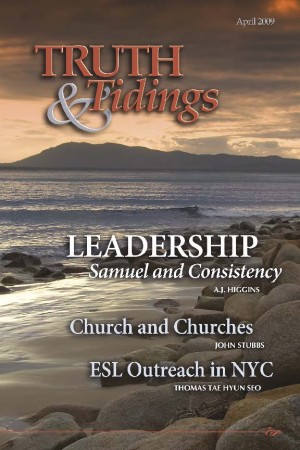 New York City keeps attracting people from all over the world in many different fields of living such as business, art, education, fashion, etc. It is well known that the city is a microcosm of the human race, in which diverse nationalities, languages, and cultures can easily be seen and heard. It is a place where many people still vividly remember what happened on September 11th of 2001.

Having commuted to the assembly from a far distance for many years, we were thankful to our gracious God when He provided Youngmi, my wife, and me with an apartment in Queens. When I was living in Pottstown, PA, I was engaged in teaching music and was an ESL instructor at a college. Thus I was looking for a job in similar areas. After much prayer by the saints in the assembly and waiting for the Lord’s answer, my current job became available. While tutoring international students after class, I often ended up counseling and answering their questions, which were mainly related to their living in a foreign country. Many international students feel extremely lonely and alienated in various situations. All of the students, while spending a great deal of money for their education, have enormous anxiety about their future. Quite a few suffer from severe depression; in some cases they turn to alcohol and a few even become schizophrenic.

During a conversation among the brethren in the assembly concerning the conflict I had using the tutorial time for spreading the gospel and teaching ESL, we came to the conclusion that the Lord would give us an opportunity to preach the gospel more effectively through inviting students on a regular basis. The assembly was happy to see this happen; it was an answer to our prayers to be used for His work.

The Lord let us have the first gospel outreach on Saturday September 8, 2006, in our apartment. Because our assembly was gathering in our dear brother Joseph Chung’s house and still looking for a place around Flushing area, the brethren thought it would be appropriate to invite them into our home. On a rainy day, six students from five different countries, Brazil, Japan, Korea, Taiwan, and Turkey, came and heard the gospel. Two speakers from our assembly simply and clearly delivered the message of God to the lost souls half an hour each with a couple of hymns sung at the beginning and end. While having refreshment together, our brothers and sisters were continually dedicated to witnessing Christ to these souls with fervent love toward them. What touched all our hearts was that some of the students had, for the very first time, heard the gospel message and it might be possible that for some it was the last time in their lives. We could see them seriously respond to what they heard. According to our Lord’s commandment, we just sowed the seed and prayed for prosperity for the souls.

Since then, in God’s grace the assembly has had the gospel outreach for ESL students every 4 weeks, on Saturdays. Brethren in the assembly have preached the gospel to the souls from different backgrounds and nationalities, and the ministry of sisters has been appreciated in the same manner. On May 14th of 2007, the Lord answered our prayer of more than four years by providing us with a gathering place on 162nd Street in Flushing. Since that first Lord’s Day when we gathered at the new place, we have been so thankful and blessed that many brethren from other local assemblies have come and proclaimed the gospel to the international students.

The Lord has steadily sent us around 5 to 15 students for each meeting from as varied as 15 countries, even though some reside far from the assembly – about two hours away – and the public transportation on the weekend is not always reliable. Many of these students hardly practice their religions, if they have one. Since they are ESL students, the message spoken in English has sometimes been hard to understand. We have therefore utilized the Question and Answer hour to further their comprehension. Brothers and sisters in the assembly have also brought friends and co-workers to this meeting and it has been a thrill to see a soul saved, baptized, and received into the fellowship. Some students attended five to ten times and heard the gospel, one of whom on the third time was deeply convicted as a sinner, repented toward God, and believed on the Lord Jesus Christ as his personal Savior; he was subsequently received into the fellowship. Since we are a Korean-speaking assembly, it is a blessing for us to be guided by the Holy Spirit to make contact and have Korean students to our weekly Lord’s Day gospel meeting.

There have been many hindrances for the meeting. Satan in many ways has been doing his best to prevent students from attending. Some students took the invitation paper to the dean, expressing their feelings of displeasure. Many times, some teachers set up parties for drinking and pleasure-seeking on the same day of the meeting or the day before. The school itself has scheduled events, as well. Nowadays, this meeting is known to many students, so even before being invited, they have already predetermined whether they would attend or not.

However, we believe that greater is He that is in us than he that is in the world. We give thanks to God that our faithful Lord continues to expose souls to the truth. It always humbles us to meet a broken and contrite heart, saying, “I feel lost. What should I do?” We pray from the depth of our hearts that the Lord will open our eyes to see souls already ripe, and give us wisdom to tell them the glad tidings. May the Lord bless the meeting for His own glory and let us grow in His grace and the knowledge of Him by obeying His Word. The saints in Flushing sincerely need you to join us in prayer!