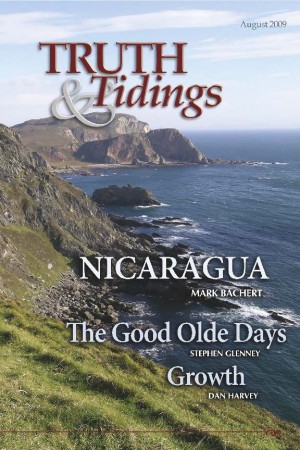 Don’t bother going to Google to search for his name. Forget looking it up in Wikipedia. Open your Bible and you will find the answer. Millennia before men began hugging trees and going green, the Creator of the universe displayed His concern for the earth in the laws which He promulgated for the nation of Israel.

His requirement for a year of Sabbath rest every seventh year (Lev 25) showed His wisdom concerning over-utilization of the field. It served as an eloquent reminder that the land belonged to Him and that Israel was granted a stewardship and needed to act responsibly with the resources which God had given them.

His tender mercies toward the animal creation are evidenced in His instructions concerning a bird’s nest (Deut 22:6, 7) and the proverb concerning the treatment of animals (Prov 12:10). It is amazing to think that the God Who regulated the most sacred and important issues in life would also be concerned with a bird’s nest.

His prohibition against the unnecessary felling of trees (Deut 20:19, 20) and His concern for pollution (Deut 23:12-14) are telling reminders that His concern for the environment predated all the current frenzy surrounding us today. His interest and care continue to this moment. He is the God Who, to quote another, attends the funeral of every sparrow!

There are, however, some major differences in the motivation between a God Who cares for the environment and the current day environmentalists. God’s great desire is to remind current-day men that they are stewards, that He is the owner. All is to make them dependent and appreciative of the God Who gave them all. Modern day environmentalists, on the contrary, have exchanged the worship of the Creator for the creation. “Mother earth” is all we have, or so we are told. Concern for the earth and its resource, the environment and its purity, are espoused with a religious fervor which shames our own spiritual zeal.

But the “go-green” and “save the earth” movements have also changed the focus of man from the internal to the external; from the personal to the environmental. Pollution is now something “out there.” It is no longer a personal, moral condition, but something which exists externally and which can be remedied by our own efforts. No longer is moral pollution an issue. In fact as the concerns with external pollution have increased, the concerns of moral pollution in our world and in the souls of men have decreased.

So does that mean we should totally ignore the concerns about the environment? No. We are still stewards here and have to use resources wisely. So if you want to hug a tree, go ahead. But as you do, lift your eyes heavenward and sing a verse of “How great Thou art!” If you want to go green, do so freely but at least hum while doing it, “Are you washed in the blood of the Lamb!”