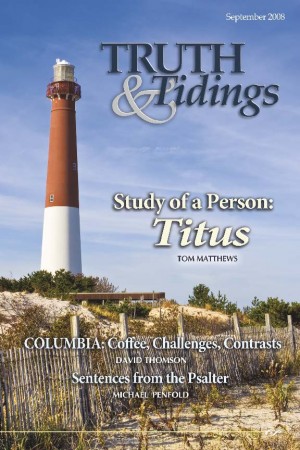 It was the middle of a conversation. I was giving instructions about a job someone had agreed to do. He had not done this task previously so he needed to hear what was involved. Halfway through the brief overview, his attention faded, eyes straying over my shoulder, to another conversation on which he had decided to eavesdrop. I watched his eyes wander; when I asked him whether he understood what I had just said, he never answered because he had switched his full attention to the other conversation. I repeated the question three times. Suddenly, realizing he had missed what he was supposed to be listening to, he sheepishly turned back to me.

I found it somewhat annoying – I suppose because what I was saying to him was important for him to know. But, in all honesty, I had to confess that the other reason was that my pride was hurt because he felt eavesdropping was more important than what I had to say. After all, I thought, wasn’t I important enough to warrant his attention for a few moments?

All of which brings us to the subject of how I listen to God’s Word in the course of a given meeting. If the CEO or VP of your company were speaking at a business meeting, you would be risking your job to be texting, IMing, or handling personal calls while he was talking. Are we losing a sense of the awesomeness, the august nature, of the presence of God in assembly meetings? While some may argue as to whether or not reverence is shown by our dress, use of Elizabethan English, etc., is there ANY argument at all about whether it is reverent or not to give God’s Word half of our attention while we are willingly engaged in personal or petty matters.

One of my high school teachers used to say, at the outset of a test, “Guard your papers! It’s not you that I don’t trust; it’s the student next to you.” The irony in this was, of course, that each of us was a “student next to” some other student. So let me say, I know YOU would never sit in a meeting and text someone or show disrespect to the Word of God. But perhaps one of your friends may need to rethink this subject.

In a day (Malachi 1) when the sense of God’s presence seemed to have sadly dissipated, His people decided it was acceptable to offer to God the blind, the lame, and the sick from their flocks and herds, along with “polluted” bread. God’s pointed question to His people was, “Where is My fear?” Where was their reverence for Him? While we should not expect young saved people to behave like old saved people, we should expect all saved people to behave like those who reverence the Lord. “God is greatly to be feared in the assembly of the saints, and to be had in reverence of all them that are about Him” (Ps 89:7). May we so live and conduct ourselves in His presence that He never has to ask us: “Where is My fear?”