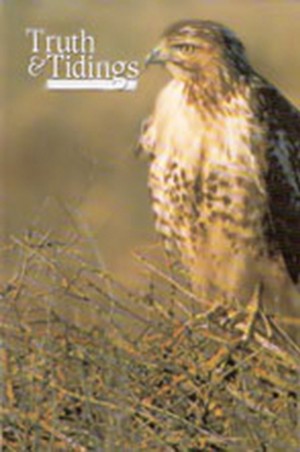 It is a principle in Leviticus that the words, “And the Lord spake unto Moses saying,” mark the commencement of a new section, if not indeed of a new subject. So it is in Leviticus 5:14, but in the latter verses of this chapter the so-called “gray area” continues. Here are sins for which, though a man may sin through ignorance, he needs forgiveness, and a Trespass Offering is required. In the following chapter there are details of sins committed deliberately, knowingly, for which no ignorance can be pleaded and where there is no allowance for the poverty of the sinner as there was with the Sin Offering.

It should be noted that the Hebrew word for “Sin Offering” is exactly the same as that for “sin” (chatta’ah, Strong 2403) and the Hebrew word for “Trespass Offering” is the same as that for “trespass” (asham, Strong 817). This shows clearly how closely these offerings are identified with the sins for which they atoned. Are we not thereby reminded of that deep and solemn statement in 2 Corinthians 5:21: “He hath made Him to be sin for us”? He, Who in His spotless life knew no sin, became our Sin Offering and suffered accordingly in our place. The Holy One became an offering for sin at Golgotha. The Sinless One died for our sins (1 Cor 15:3).

Ye who think of sin but lightly
Nor suppose the evil great,
Here may view its nature rightly,
Here its guilt may estimate.

In Leviticus 5:15 it is envisaged that a man may sin in the holy things of the Lord. This was most serious. Sinning against my fellow man is serious enough and is also reckoned to be sinning against the Lord, as David confessed in Psalm 51:3-4, but sinning in the holy things is a direct offense against Him. This required an offering hitherto not mentioned in Leviticus. It is conceded that there may be ignorance but this may be due to carelessness or negligence and is therefore inexcusable. How then could a man sin in the holy things and how may we do so today?

Today there are many believers who are not baptized. Is this through ignorance? Or negligence? Or carelessness? Whichever, it is sinning in holy things since it is a clear command of the Lord for us. Many also who, in spite of the simple request of the Lord Jesus on that last evening in the Upper Room that we should remember Him in the way of His appointing, fail to do so. Perhaps if we believers realized how grievous to God is the withholding of that which belongs to Him, we would be the more diligent to observe and obey.

The sinning Israelite must resort to the altar with the appropriate offering and see it die. The believer today should resort to Calvary and there view the cost of all that has been provided for him and then ask, “If my Lord has suffered all that for me, how can I withhold anything from Him?”

In Leviticus 5:5, the required offering is a ram. Other Trespass Offerings may be in the form of lambs or kids of the goats, but this trespass demanded the life of a ram, thus reflecting the seriousness of the trespass even though there may have been some element of ignorance. This is the first mention of a ram in Leviticus and as with every other offering it must be without blemish. These early shadows of Him Who was to come consistently portray the sinlessness of the Savior. Only a sinless Savior could take the place of sinful men and women at the cross.

Moses and the officiating priests were then required to estimate the value of the offense in shekels of silver. This having been assessed then the offender must make restitution and pay the value of that which he had withheld. But even this was not enough. There must be added to that value the fifth part, in shekels of silver which must agree with the shekel of the sanctuary.

The typical teaching of all this seems clear enough. God has been robbed by the sins of men. This violation of His rights began in Eden. It continued throughout the history of Israel and the nations and persists until this day. Man is helpless in himself to make proper amends for the robbery, but there came a Man, a blessed Man, with no claims whatever against Him, and in His holiness He gave to God all that God ever desired to find in a man. The laying down of that lovely life was a restoration of that which other men had taken away, and now, risen in triumph from the dead, He is leading many sons to glory. If it may be said very reverently, God has now, today, more glory than He had before Adam sinned. He has one unique and only-begotten Son, but there is now, destined for glory, a race of men just like that Son, all redeemed by blood and soon to have bodies of glory like Him, suited for heaven. Prophetically the second Man, the last Adam, says, “Then I restored that which I took not away” (Psa 69:4). Christ has restored the principal, and has added the fifth part, a revenue of grace. It cost Him His life.

Behold, a spotless victim dies,
My surety on the tree;
The Lamb of God, my sacrifice,
He gave Himself for me.