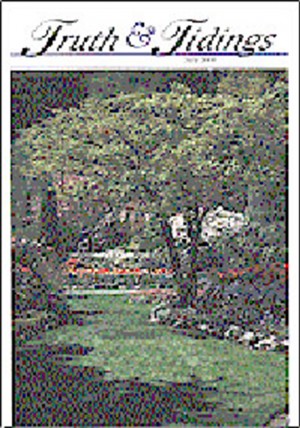 Editorial: She hath done what she could

Marriage and the Family – Scriptural Roles for Spouses

Our Heritage – A History of Philadelphia Area Assemblies

Go Ye Into All The World – The Work of God Around Descalvado, Brazil

This Was Their Story – George Albert Ramsay

It could have been a sad story of a lost life. A little five year old boy stood barefoot paying his last respects to his mama as her body was carried out of the house. At 28 years of age, she became another victim of the 1913 epidemic. For seven years, Albert drifted from relative to relative until his father set up a little home on the County Line Road, in Prince Edward Island. But it was a home without a mother.

As a boy, a dark cloud of loneliness hung over his head, which only an orphan understands. In his early teens his violin playing brought him into the company of those much older than himself who influenced him in the ways of sin. The teenage fiddler at parties and dances soon experienced how quickly the fun of the good times vanishes and the bubbles of pleasure burst. Disillusioned with the emptiness of a life of sin, he said to his sister coming home from a dance: “If this is all there is to live for, I feel like taking my own life.”

After a brief flirtation with religion – he quickly dismissed his “Stand for Christ” at a Revival Meeting as nothing more than a bogus profession. Having experienced the emptiness of a profession without Christ, Albert returned to his old friends and lifestyle with a new zest. Now with contempt for religion, he defiantly refused a gospel tract and with disdain said: “I am not interested in religion. I have to work for a living. I dont have time to read!”

However, God did not abandon this lost sinner in an obscure community on a tiny little island, but further moved in rich grace to reach a lost, wandering sheep. From Ontario, Russell Harris made the trek to P.E.I. in the winter of 1933 to preach the gospel in the little schoolhouse in that remote community Albert along with many others included the gospel meeting on the Friday night social circuit – immediately followed by the dance. Although “preaching jokes” at the dance were common, the persistent message,” … not of works, lest any man should boast,” was getting through to Albert.

In June, 1934 Albert Joyce and Herb Harris from Ontario arrived in P.E.I. for gospel tent meetings at Gambles Corner. They had Alberts ear from the first night. He knew he needed to be saved, and he wanted to be saved – but not until after Lodge Night and the dance. He skipped meeting that night but his feet dragged heavily over the dance floor. Leaving early, he went home, not to think about “taking his stand for Christ,” but rather the fact that he was “condemned already”

Mr. Harris confronted him the next day; “We missed you last night, Albert.” He replied, “Yes, I had to go away” Mr. Harris fixing his eyes on him said: “You had to go away! Albert, do you want to go to Hell?” “No, Mr. Harris, I dont want to go to Hell,” was his response, to which Mr. Harris then said, “Well, Albert, that is where you are going! The devil has outwitted millions and you will be no exception. If you dont make one mighty effort to get Gods salvation, you are going to be in hell as sure as you are sitting on that old farm wagon. Will you promise me you will come tonight with your mind made up that you will not leave until you are saved?” “Yes!” was his contrite and honest response.

He walked two miles to meeting that night desperately wanting to be saved. The message of a broad road leading to hell and a narrow way leading to heaven brought back vivid memories of his grandmother and what she had tried to instill in his young mind. How could he get saved that night? Could he take a stand or go to the front? “No”, he thought. “They have told us there is nothing we can do. All was finished on the Cross; all we can do is believe.” The meeting was coming to a close. Mr. Joyce finally said, “If the judgment and wrath of God will not move you, will the outstretched arms of a bleeding Savior on the Cross have any appeal? Let us pray.”

“Here, the meeting is over and I am not saved! I cant get saved! Im lost. I will just have to go to hell,” he thought. But Albert was not left like that. To him it seemed like God sweetly said, “I knew that 1900 years ago and that is why I gave my Son.” Before the preacher said “Amen,” he was saved through simple faith in that finished work.

A sad story of a life lost? By no means! A life saved at 21 years of age – a soul saved for eternity. After a rich, abundant life of serving his Master over 59 years, in the spread of the gospel and the strengthening of Gods people, the Master retired him from service in this life, and welcomed him through the portals of glory in 1993.