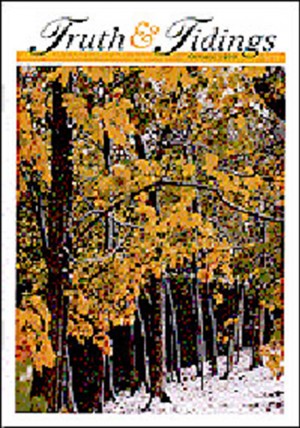 I had the privilege of being raised in a Christian home and growing up with the knowledge of God’s Word which declared me to be a sinner who could never be in heaven apart from God’s salvation. I cannot recall a time when I did not want to be saved. The rest of my family was saved while I was young, so the fear of being left behind when the Lord returned was a constant concern to my young mind. When I was in my last year of high school, my father was suddenly taken home to be with the Lord. This experience created within me resentment toward God, and for the first time in my life I questioned the reality of it all, although I would never have acknowledged such doubts. At my father’s grave side, Mr. Jim Smith said to me simply, “Don, it’s real.” Those words stuck with me over the next several years and preserved me on many occasions.

In my first year of Chiropractic College, I encountered a philosophy professor whose stated aim was to undermine and destroy our Christian heritage. Although I would argue publicly with him to defend the truth I had been taught, I began to wonder if I had been brainwashed to accept an irrational belief system. The scholarly atheist loves to declare that science leaves no room for God. It was, however, the study of the sciences that convinced me that there must be a God. Human structure and function reveal detail, order, and intricacy that simply cannot be explained by evolution. I gradually recognized that there had to be a God! That settled my mind. If there were a God, then I knew enough about the Bible to recognize it as the Word of God. I recognized the reality of Christianity in the lives of my parents and others. That confirmed that salvation was a reality, and I must be saved.

My friends in College were all Christians from various backgrounds who accepted me as a Christian. The Inter-Varsity Christian Fellowship group asked me to write its yearbook editorial. But inside, I was longing to know peace with God and the assurance of heaven at the end of life. I read tracts and tried to figure it out, tried to trust and believe, tried to accept or to come. My fear of a “false profession” kept me from speaking to anyone. Well-meaning preachers would single me out in a meeting, little realizing the longing that was deep within. I told God more than once that I was willing to give up a career or anything else if He would only save me. To this day, I could not tell you what stood in my way.

Mr. Norman Crawford and Mr. Robert McIlwaine came to Mimico for gospel meetings in the spring of 1972. I determined I was going to get saved in those meetings or forget the whole thing. I was fulfilling clinical obligations, and was at school from 8 AM to 8 PM at that time, but I rushed across the city each night to hear the gospel. Yet with all my “commitment” to getting saved, I was still in the darkness of my sins at the age of 21 and extremely discouraged after about three weeks of meetings. I thought I might as well forget it and give up all hope of salvation. “I’ll just have to go to hell.” But then I thought, “There are only a few nights left, I might as well finish the series.” That night, or soon after, the preacher quoted Romans 5:6.,” When we were yet without strength, in due time, Christ died for the ungodly.” “Without strength” – that was me. All my determination and attempts to understand it were to no avail. “In due time” – when my attempts had failed; that’s why Christ died. I never questioned my sin, but God had been gradually bringing me to recognize my utter helplessness. I thought, “I’m saved.”

As the meeting closed, I thought, “I’d better wait and see if I’m really saved. I don’t want to hang on to something that is not real.” The next morning I looked at Romans 5:6. It hadn’t changed. I waited, however, for some feelings for assurance. I had heard as a boy the testimony of Mr. George Shivas who declared that “the sun never shone brighter, the grass never grew greener” than on the day he trusted Christ. Sadly, I went for two full years and never told a soul of the truth that I understood that night, not appreciating that God’s Word is reliable while feelings are not.

It was in meetings with Mr. Lorne McBain in 1974 that I began to realize that God’s Word is all the assurance I needed. “God says it, I believe it, that settles it!” Twenty-seven years have passed and the truth of Romans 5:6 is all I have – and all I need – to face eternity!