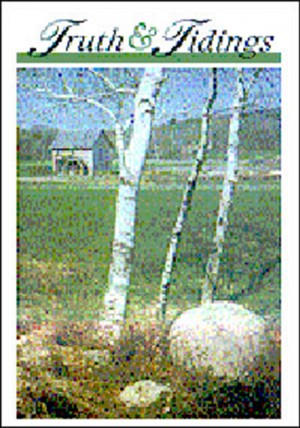 An open home, an invitation, a summer spent in gospel work, the personal interest of another brother: these and other influences were used to channel a life for God.

As a boy, I was raised in a godly home. My parents received Christ as their Savior when I was four years old. The Word of God and the assembly were the top priority of their lives. Morning and evening we read the Scriptures, memorized verses and sang hymns. As a result of this training, I had a desire to be saved. My father had a great influence on my life. He was the one who led me to Christ at the age of 14 through Isaiah 53:6.

As I went to school each day, there was an elderly sister in the assembly who sat on her front porch every morning reading her Bible. She was a godly woman who made a deep impression on me.

In 1945 when stationed in San Francisco in the Navy; I had many free evenings. An elder in the assembly there invited me and some other servicemen to his home to study the Scriptures. This was a great help to us who were away from home and the assembly. They were also kind to us in other ways.

The year 1948 was a critical time for me. I was employed as a fireman on the railroad, working many hours and not able to attend all the meetings. Mr. Theodore Williams advised me to change my employment, which I did. Jobs were scarce, but the Lord opened the door so that I could attend all the meetings of the assembly. It was not easy but the Lord’s hand was in that move.

The summer of 1953,1 met Mr. Sydney Maxwell. We had many long conversations. He advised me to use my time wisely and spend this time reading and studying the Word of God. He also encouraged me to spend much time in prayer and to knock on doors with the gospel.

In June 1955, I met Mark Martinmaki of Laurium, Mi. We spent our first vacation there on the advice of William Ferguson. Mr. Martinmaki was a proficient student of the Scriptures. We spent many all night sessions studying the Scriptures together for many summers. He encouraged me to go with him to the farming country area for cottage meetings in homes and schools.

In the late sixties, Mr Herbert Dobson and I went to Laurium, Mi. during the winter season for gospel and ministry meetings. The trip north and return were spiritual feasts for me. He was a great help to me and an influence on our children.

I would be remiss if I did not mention the positive influence my dear wife had on me all these years. She encouraged me to spend all my free time in the work of the Lord in relation to the assembly.