Early in the morning on April 24, 2018, police arrived at a house in the city of Citrus Heights, CA and arrested a 72-year-old man by the name of Joseph James DeAngelo. Although his identity was unknown until just a few days prior, DeAngelo was wanted for over 100 serious crimes during the 1970s and 80s, spanning hundreds of miles and almost 15 years. Such was his notoriety that he is the inspiration behind numerous blogs, documentaries and books, and has even become known by a moniker, the Golden State Killer. For years, all investigators had was a DNA profile retrospectively pieced together from evidence recovered at crime scenes long before DNA science existed. Speculatively, the Sacramento Police Department uploaded the elusive offender’s profile to a public genetic database and hoped for a match. They got a break when the database turned up a number of distant relatives. Forensic genealogists constructed the offender’s family tree and within months had built a short list of two possible suspects. Quickly they eliminated one and concluded that DeAngelo was the Golden State Killer.

In addition to highlighting the power and reach of scientific progress, this story underlines an interesting feature of genealogical research: readily available and detailed genealogical information is a recent phenomenon. The large-scale digitisation and online publishing of historical records have made tracing one’s heritage more accessible, but despite these improvements, our family trees are often convoluted. Sometimes they traverse international borders and hit dead ends; occasionally they are redacted to cover embarrassment. In the author’s case, the multiplicity of online records made establishing the exact identity of his great-great-grandfather onerous. In short, tracing your family tree remains quite a complex task. But for a first-century Israelite the opposite was true, for diligent scribes had immaculately recorded the nation’s heritage. Furthermore, specific lines of the tribe of Judah and the house of David were also preserved by the inspiration of the Holy Spirit.

This is not mere happenstance, for a comprehensive genealogy is of vital importance when it comes to tracing the lineage of Christ. We previously noted that the purpose of a genealogy is to establish the legitimacy of a claim to a particular role or office, and Luke is particularly interested in the fundamental basis upon which all the Messianic roles (Prophet, Priest and King) are founded: His role as the Mediator-Redeemer. Matthew makes a different, if not unrelated claim about His right to reign, but Luke is concerned with His right to redeem, and thus he demonstrates that He is uniquely credentialed to meet the requirements of the role.

As far back as Job, these requirements were identified subjectively. His lament was for a “daysman” (mediator) that “might lay his hand upon us both” (Job 9:33). The calamity of the Fall had brought a quandary upon humanity that wasn’t soluble but by divine intervention. Whether he understood it fully or not, Job recognised that his Mediator-Redeemer must be God, for only God can save, and He must also be a man so He can substitute for us. Paul elaborated on this to Timothy: “There is one God, and one mediator between God and men, the man Christ Jesus; Who gave himself a ransom for all” (1Ti 2:5-6 KJV). The Mediator is a man, but He is also Christ, thus in His substitutionary ransom, He lays a hand on God and on us. The Redeemer couldn’t just be any man, for if that were the case, then our efforts would be as valid as any. Yes, He must be a real man, but He must also be a perfect man. Peter underlines this by informing his readers that they were redeemed “with the precious blood of Christ, as of a lamb without blemish and without spot” (1Pe 1:19 KJV).

However, Job’s subjective appreciation of his need did not create the need. What he comprehended was already the objective of the first prophecy of Scripture. After the Fall, God spoke to each of the parties and pronounced a specific aspect of a curse that would fall upon them. The Serpent was told that enmity would exist between his seed and the seed (singular) of the woman (Gen 3:14-15). This exactness was not accidental; God intended the specificity with which He spoke. The enmity would be between the seed of the serpent and the singular seed of the woman, not the seed of the man, and not plural seeds. He continues: “it shall bruise thy head, and thou shalt bruise his heel” (Gen 3:15 KJV). Scripture’s first prophecy is granted in response to Adam’s sin. Not only would One come who would be born of a woman, and thus genuinely man, but more specifically He would be of the seed of a woman and therefore not connected with Adam, and so perfectly man.

Accordingly, Luke presents the genealogy of Christ to underline the exact nature of His relationship to Adam, the first man, and establishes each of these points. First, he uses the particulars of the genealogy to note that Jesus was linked genealogically to Adam and thus He was a real man. Adam was “the son of God” (Luk 3:38), the very pinnacle of the creation, and as such, the “first man” (1Co 15:47). Through a careful tracing of history, Luke connects Christ to Adam. A casual observer might argue that in this way we are all connected to Adam, but Luke’s point is not how different Christ is to us, but how like us He is. Thus Luke is affirming the true humanity of Christ.

But Luke observes another particularity: Jesus Christ was not the actual son of Joseph, but was incorrectly assumed to be so (Luk 3:23). Joseph was His guardian, and Mary’s husband, but Scripture states that Christ was conceived “of the Holy Spirit” (Mat 1:18) and thus took nothing biologically from Joseph. Rather than trace Joseph’s line as Matthew does, Luke traces Mary’s line[1] to show that Christ is the fulfilment of the prophecy given to the Serpent and therefore is not linked to Adam genetically. He is not just a real man, but a perfect man. He is the “second man,” not in chronology, for there were more than 70 generations between the two, but in order. Christ is the head of the second order of man, the “Lord from heaven” (1Co 15:47). Adam was created to be the head of a race that would bring delight to the heart of God. However, he fell and subjected the whole race to its effects, and in so doing divested himself of his own privileges. As the second man, Christ came to restore that which Adam had discarded.

In establishing His perfect humanity, Luke is also affirming His deity. Unlike Matthew, Luke does not position his genealogy at the start of his gospel but following the account of the birth and baptism of Jesus, and before the temptation by the Devil. Matthew bases his whole approach on his genealogy; in fact, his gospel is an expansion of the “book of the generation of Jesus Christ” (Mat 1:1), underlined by his constant use of the continuative Greek participle de. This continuity demonstrates that the material he is assembling is to prove the particular right his genealogy is establishing (we will consider this in another article). Instead, Luke strategically positions his genealogy between these two events. The reason is found in understanding Luke’s overarching aim. He informs Theophilus at the commencement of his “treatise” (Act 1:1) that his purpose is to “set forth in order a declaration” (Luk 1:1). Commentators have noted that Luke’s order is not chronological but moral. Luke is arranging his material to establish his main point: the perfect humanity of Christ, or more specifically, the perfect blend of humanity and deity in one person.

Consider this: of the baptism of Christ, Luke records that heaven was opened and a voice proceeded forth. The voice is revealed by the substance of its declaration: “Thou art my beloved Son” (Luk 3:22). Of the temptation, Luke states that the Devil prefaced two of the three with the challenge “If thou be the Son of God” (Luk 4:3,9). Thus the event preceding the genealogy is a claim to the deity of the Lord Jesus – Son of God – while the event following is a challenge. The Devil desired to undermine Christ’s perfect blend of humanity and deity, and what better way to do it than tempting Him to sin? But Christ had no sin in Him (1Jn 3:5) and could not respond to temptation, and so in the purpose of God, Luke utilises the account to record His triumph and establish the deity of the man Jesus.

Thus, in one careful use of a genealogy, Doctor Luke presents the particulars of the lineage of Christ in such a way that he establishes His real and perfect humanity, and positions it in his narrative to show how this was blended with His deity. We conclude: as to His essence, God; as to His substance, man. Christ was connected to Adam genealogically, but unconnected biologically. A gem from Luke’s genealogy!

[1]¹ The writer is aware that there is a difference of opinion among scholars as to whether the apparent discrepancies between the genealogies of Matthew and Luke can be explained by attributing Luke’s to Mary. It is the writer’s opinion that on the balance of probabilities the simplest and most scripturally coherent explanation is to assume that it is Mary’s. For a fuller treatment of the issue see “The Purpose of the Biblical Genealogies” (2nd Ed.) by Marshall D. Johnson (2002). 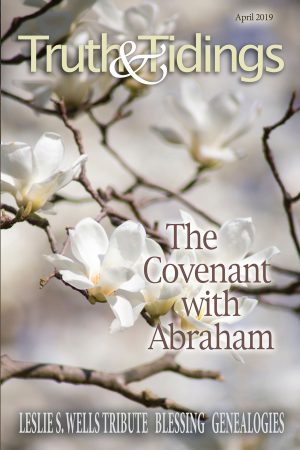