God’s house in the Old Testament had a pattern. With painstaking precision God specified the Tabernacle’s materials, dimensions, layout, and its method of construction. Nothing was left to human imagination. God said to Moses, “See … that thou make all things according to the pattern showed to thee” (Heb 8:5, KJV).1 This pattern served to reveal God’s wisdom and glory.

Is there a pattern for God’s dwelling today? Yes! We are not left to just make it up as we go along. The New Testament gives a definite pattern and blueprint to be followed in all cultures, on all continents, and throughout all centuries of the present dispensation.  For example, in 1 Corinthians 3 we learn how to build into the assembly, while in 1 Timothy 3 we are told how to behave in the assembly. Note the terms Paul uses in 1 Corinthians 3. As the preacher who saw the assembly planted, he calls himself a “wise master builder” who laid the “foundation” for “God’s building.” He designates the assembly “the inner temple of God” and speaks of materials of “gold, silver, and precious stones.” The deliberate metaphorical parallels with the Temple of old could hardly be clearer.  If Moses and Solomon were duty bound to follow the Divine Architect’s plans for God’s house in a past era, what about us now?

Note carefully Paul’s words in relation to the local assembly; “Let every man take heed how he buildeth” (1Cor 3:10, KJV). Care is vital for building because how faithful we are to the divine blueprint will be assessed when we meet the Lord in heaven (1Cor 3:10-15). The Lord will hold us accountable in these matters because He has given us clear, detailed, and definite instructions for us to follow.

Throughout the ages, human nature has repeatedly displayed a tendency to think it knows better than the Divine Designer. The sons of Aaron introduced “strange fire,” Ahaz a foreign altar, and David a new cart. In the assembly at Corinth, the believers were working according to man’s wisdom, not God’s. In the wisdom of God, Paul and Apollos were to be seen as simply servants, but the Corinthians had put them on a pedestal and turned them into “celebrity speakers.” They had elevated gift over spirituality, knowledge over love, outward performance over inward grace, and the greatness of men over the “foolishness of the cross.” So, Paul wrote 1 Corinthians to explain the difference between worldly wisdom and the wisdom of God – not only in relation to the gospel (ch1) and the communication of truth (ch2), but also in relation to “how to build” local assemblies (ch3).

The interjection of human wisdom in the building of local assemblies did not die out with the Corinthians. In our generation, for example, the pressure to look appealing to the world has resulted in a wholesale jettisoning of any thought of strictly following a New Testament pattern, and a turning instead to what works (“the end justifies the means”). Exposition has been surrendered to entertainment, preaching to performance, doctrine to drama, and theology to theatrics. The emphasis in many places is now simply on big numbers, big names, and big sounds. But, for Paul, the choice was simple.
Build according to man’s wisdom – and at the Judgment Seat, all will be seen as worthless; or build according to God’s wisdom – and one’s work will abide (1Cor 3:9-15).

The pattern for a New Testament assembly is mandatory, not optional. New Testament assembly principles such as gathering to the name of the Lord Jesus alone, the distinction in roles between male and female in relation to teaching and leadership, the acknowledgement of headship by the symbols of the covered and uncovered head, the plurality of elders, the weekly Lord’s Supper on the Lord’s Day – these are all non-negotiable features of the pattern. They form part of “the apostles’ doctrine” in which we are to “continue steadfastly” (Acts 2:42, KJV).

For example, what of a name? Can we not take to ourselves a convenient banner such as Baptist or Presbyterian? That would be to violate the pattern. Any such name is at the same time both wider and narrower than the Biblical titles of Christians, believers, brethren, and saints: wider, in that denominational names include believers and unbelievers alike; narrower, and sectarian, in that they exclude all who refuse to adopt them.  What of women speaking in assembly meetings? Is there anything in the pattern to guide us? Yes. Paul says, “Let your women keep silence in the churches” and a few verses later states: “The things I write to you are the commandments of the Lord” (1Cor 14:34-37, KJV). Note the word “commandments.” The Bible’s teaching on this issue is not a suggestion!

Human wisdom will always seek to circumvent the pattern. Would it not liven up our prayer meetings if the sisters could take part? Could we not have the men praying in one room and the women in the other? What about having a “women’s conference” where sisters can teach, so long as men are not present? Yet nothing of this is found in the New Testament. Neither by direct commandment, nor by example, nor based on any general principle can we find assembly meetings broken down into small groups. In His wisdom and for His glory, as well as for our protection and blessing, God has designed all the meetings of an assembly to be open to all the believers, to be overseen by local elders, with the truth of headship symbolically on display, and all the teaching carried out by gifted men.

A Fitting Design for the Present Dispensation

God’s design for the local assembly not only reveals His wisdom, but also reflects the character of the present dispensation. Because the types and shadows of the Old Covenant have found their fulfilment in Christ, Christians today have no need for naves and chancels, for choirs and vestments, or for feasts and festivals, all of which hark back to these obsolete foreshadowings. Our calling is to gather to His name alone, a remnant testimony outside of the political, social, and religious camps of this present evil world. Jew and Gentile in fellowship together, worshiping God in spirit and in truth, and displaying the divine order of headship to angels – thus reversing the chaos of Eden’s garden and delighting the heart of God in the midst of a godless, rebellious culture.
When considering the difficult questions of our day in relation to assembly order and practice, the words of C. H. Mackintosh are weighty and thought-provoking: “In the presence of the searcher of hearts, ask yourself this plain, pointed question, ‘Am I sanctioning by my presence, or adopting in my practice, any departure from, or neglect of, the Word of God?’ Make this a solemn, personal matter before the Lord. … If you find that you have been, in any wise, connected with, or involved in, ought that wears not the distinct stamp of divine sanction, reject it at once and forever. … If you cannot say, in reference to everything with which you stand connected, ‘this is the thing which the Lord hath commanded,’ then away with it unhesitatingly, away with it forever.” In light of the day of review at the Judgment Seat, our first thought in building must be faithfulness to revealed truth (1Cor 4:2). Let us be careful what doctrine we teach and what practices we encourage; let us take heed “how we build.” 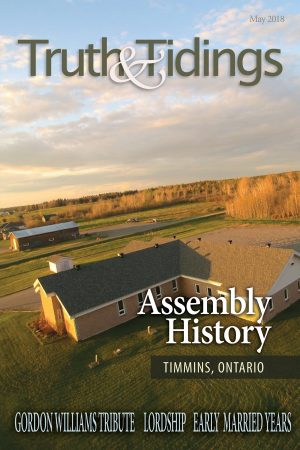