To many, the word “substitute” often elicits the idea of something less than the best. We like our coffee with sugar, but for health reasons we decide that a sugar substitute will have to suffice. Pre-internet “catalogue shopping” included the inherent risk of receiving something other than the desired item. It was the practice of substitution. The blue shirt that was ordered arrived as a red shirt—a substitute. Sports analogies abound, as players taken out of play are replaced by a substitute player. The concept is clear and common: one person or thing takes the place of another.

As commonplace as the practice is in everyday living, the majesty of the spiritual truth of substitution is at the very heart of salvation and is the reason Christians worship and stand in awe of a God who was willing to send His Only Son as the Substitute to die in the place of guilty sinners. Genesis 22 presents a most beautiful story laden with an inexhaustible wealth of teaching that pre-figures the life and substitutionary death of our Lord Jesus Christ.

The day was unforgettable to both Abraham and Isaac. Abraham was challenged to give up his only son, the son he so loved and, from the perspective of human thinking, was about to say goodbye to his future. Isaac was destined for a sacrificial death which only his father was able to understand. The symbolism is rich, as we see the wood carried by Isaac, the fire and knife by Abraham, both moving together in quiet communion to a distant place foreign to them. Conflicting tones of love and obedience are intermingled with Abraham’s unshakeable faith in the promises of God Who had already declared Isaac to be the fountain from which all future blessing would flow. How could that be, if Isaac was to die?

The moment arrives, as the son born of miraculous birth, and on whom the blessing of a world hangs, is laid on an altar. Abraham, rich in faith and refusing to let the limitation of human understanding cloud his faith and obedience, raises the knife. In that crucial moment, a voice from heaven stops Abraham, sparing Isaac and providing a substitute, as a ram, involuntarily caught nearby, is placed on the altar in the place of Isaac. The picture is unmistakable.

Two thousand years run their course, and through the incarnation, the Son of God comes into the world to save guilty sinners. But how? While Isaac had his faults, this Son is God, perfect, unable to sin. And yet He moved with steady course and perfect obedience to the cross where, rejected by the world and abandoned as the Substitute for sinners, He gave His life. He suffered once and for all for sin, the Just one for us the unjust ones that He might bring us to God (1Peter 3:18). He gave Himself as a ransom for all (1Tim 2:6). Christ died for the ungodly (Rom 5:6). The Good Shepherd lays down His life for the sheep (John10:11). God made Him who knew no sin to be sin on our behalf, so that we might become the righteousness of God in Him (2Cor 5:21). Are you a sinner in need of a Substitute? Can you say with Paul in Galatians 2:20, “the Son of God loved me, and gave Himself for me?” 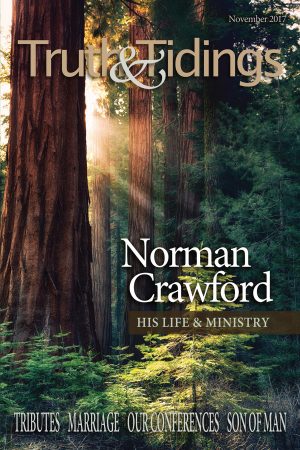