Acts 8 is the account of the advance of the gospel into Samaria, but it also includes the revelation of the insidious working of the enemy in opposition. Throughout the Scripture, whatever God establishes as true and genuine is ultimately challenged by Satan with a counterfeit. In Acts 8, he used a sorcerer by the name of Simon to advance his sinister cause.

Luke, the writer, goes into great detail in describing Simon. He is portrayed as a man of tremendous persuasive power, for he had “bewitched” or “astounded” the people around him by the use of magic or witchcraft. So extensive was his influence that the people considered him “the great power of God,” and his satanic spell over them was long-standing. However, when Philip began to preach Christ, and confirmed the word by miracles and signs, many believed and were baptized, with the result that there was great joy in the city. The reality of salvation transformed the lives of many, but it also impacted the spell that Simon had over the people, and he began to realize that he was losing his following.

The response to all of this was that Simon himself “believed and was baptized.” Although all seemed to be genuine from the initial appearance, “spiritual fault lines” soon began to appear. Luke writes that he “continued with Philip,” but it was not to learn more of the Word of God or to appreciate the grace of salvation, but rather to observe the miracles and signs and to seek to learn how they were done. The fraud of Simon’s profession came to full light when Peter and John were sent to Samaria to follow up the report of the great response to the gospel. As Simon observed the imparting of the Holy Spirit to these new believers by the laying on of the hands of the apostles, he offered money to Peter so that he could also have the power to convey the Holy Spirit to others. Basically, he desired to once again become a “power broker” for his own advantage and gain. He did not ask for the power of the Spirit, but rather for the power to bestow Him to others.

Peter’s response removes all doubt as to whether Simon was a true believer. His perceptive words were a stinging rebuke to the clever deceiver, as he revealed that Simon had neither “part nor lot in this matter.” His heart was not right with God and, apart from an acknowledgement of his personal need, he would perish along with his money. Sadly, Simon’s response was not one of true repentance, but instead an appeal for Peter’s intercession, that he might not experience the judgment of God upon him.

There are still many “Simons” in the work of God today – individuals who have heard great truth, seen mighty evidences of God’s power, and professed to be saved, but who have failed to face the key issue of their need for forgiveness. Professors … but not possessors! 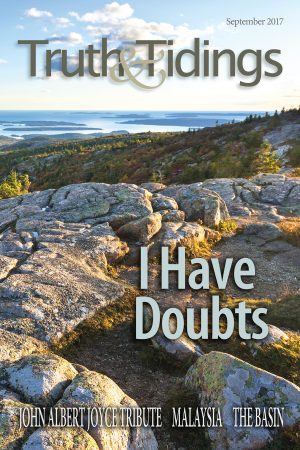