This hymn is often included in a list of favorites for many believers. It was written by a young man in his early twenties, and has been sung now for nearly 250 years. The title of the hymn comes directly from Scripture, though many might not immediately recognize it. Two favorite verses from the prophet Isaiah have been a source of strength, comfort, and encouragement for centuries: “Thou wilt keep him in perfect peace, whose mind is stayed on thee: because he trusteth in Thee. Trust ye in the Lord forever; for in the Lord Jehovah is everlasting strength” (Isa 26:3-4).

The Hebrew for “everlasting strength,” is literally, “the Rock of Ages.” Our God IS a Rock – our foundation, our assurance, our strength, our safety. Both 2 Samuel 22:32 and Psalm 18:31 ask the identical question: “Who is God, save the Lord? And who is a Rock, save our God?”

August M. Toplady trusted Christ as his Savior when he was a boy of 16. He was born in Surrey, England, but his father was lost in battle when he was still an infant. His mother faithfully raised him in the fear of the Lord. They moved to Ireland, so he could pursue his education at Trinity College in Dublin.

One evening they were traveling through County Wexford and heard singing coming from a barn. They went in to listen, and after the singing ceased, an unassuming man named James Morris ably preached the gospel from Ephesians 2:13: “Ye who sometimes were afar off are made nigh by the blood of Christ.” The young man was convicted that night of his sin and of his need for salvation. He later wrote, “Strange that I who had sat so long under the means of grace in England, should be brought nigh to God in an obscure part of Ireland, midst a handful of people met together in a barn, and by the ministry of one who could scarcely spell his own name. Surely it was the Lord’s doing, and is marvelous.”

Following graduation, he spent the rest of his life faithfully preaching the Word of God. He moved around England every few years, but after health issues developed, he stayed in London. He regularly preached the gospel to crowds as large as 1500 people. One has written, “He was a man of deep piety, who yearned after personal holiness, and who consecrated all his intellectual gift and learning unto the Lord.”

He was a man who greatly enjoyed his salvation. Even though his health failed while he was still very young, he considered himself “the happiest man in the world.” When he was on his deathbed, and physicians told him he did not have long to live, he rejoiced. He said “Why, that is a good sign that my death is fast approaching; and blessed be God, I can add that my hearts beats every day stronger and stronger for glory. Sickness is no affliction, pain no cause, death itself is no dissolution … my prayers are now all converted to praise.” In his thirty-eighth year, Augustus Montague Toplady succumbed to tuberculosis, and slipped into the wonderful presence of his Savior.

He wrote a number of fine hymns, some still widely sung today, including: “A Debtor To Mercy Alone” and “From Whence This Fear And Unbelief,” two of his better known hymns. But “Rock of Ages” is by far his best-known.

The story is told (but not substantiated), that one day in Somerset, England, he was caught outside in a severe thunderstorm. He took refuge in a rocky glen, and hid from the storm beneath two massive rock pillars, that towered over 100 feet high. A fissure had split the two pillars, and he hid in a cleft of those rocks. Taking refuge there, his mind turned to what he had learned from Isaiah 26:3-4, and this timeless hymn was born in his soul.

Rock of Ages! Cleft for me,
Let me hide myself in Thee!

Let the water and the blood,
From Thy riven side which flowed,
Be of sin the double cure,
Cleanse me from its guilt and power.

Not the labor of my hands
Can fulfill Thy law’s demands;
Could my zeal no respite know,
Could my tears for ever flow,
All for sin could not atone:
Thou must save, and Thou alone!

Nothing in my hand I bring,
Simply to Thy cross I cling;
Naked, come to Thee for dress;
Helpless, look to Thee for grace;
Foul, I to the fountain fly;
Wash me, Savior, or I die!

Whilst I draw this fleeting breath;
When my eye-strings break in death;
When I soar through tracts unknown,
See Thee on Thy judgment throne-
Rock of ages, cleft for me,
Let me hide myself in Thee!

As with many old hymns, the words have changed through the years. But the deep spiritual meaning has never changed. The Rock upon Whom we stand for eternity, the riven side of the Savior which has produced the precious blood necessary for our reconciliation to God, and our very Advocate in the presence of God for us when we stand before Him, will be none other than this blessed Rock of Ages.

One has said “no other English hymn can be named that has so laid such broad and firm a grasp upon the English-speaking world.” Another remarked, “This is a hymn that meets the spiritual needs of all sorts and conditions of men, from derelicts to Prime Minister.” At the funeral of Prime Minister Gladstone, this hymn echoed throughout the walls of Westminster Abbey.

Thank God that when rains descend, floods come, and winds blow, our frail spiritual houses will not fall, for we have been founded upon the Rock of Ages. 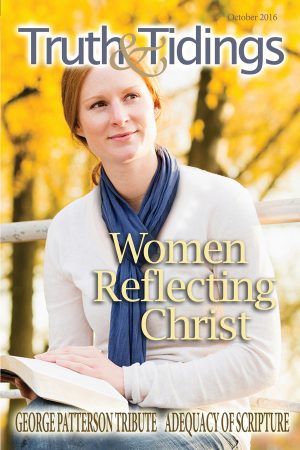