On August 4, 2015, James N. Smith was called home to be with the Lord. His home-call represents a great loss to his wife and family, and to the work of God in  N. America. Jim was held in high esteem by all. His tireless labor in the gospel, his warm ministry, and his sincere interest and care for the Lord’s people and the testimonies to God in N. America endeared him to the hearts of all.

He often mentioned how common his name was, humorously telling us of the “Jim Smith Society” that existed because the name was one of the most common names in N. America. But his life and labors were anything but common and pedestrian.

He was born into a Christian home in Niagara Falls, Ontario, on September 1, 1930. He frequently recounted how he was saved. It was on October 8, 1939. His father read him 1 John 5:9 which convicted him that he was calling God a liar. It was then that the wonderful truth of Romans 5:6 was revealed to him. He said, “I just simply accepted the divine record.”

He married in 1952 and was commended to the work of the Lord in 1954. His early days of labor were among the French speaking assemblies in Quebec, in a little village called Roulette. He also labored in Rouyon in Northern Quebec. He labored with Vincent Davies in those early years and experienced opposition being forced out of towns and villages by local priests. He and his wife knew privation and hardship as they served the Lord in those early days.

Subsequently, he and his wife Margaret moved to Welland, Ontario, in 1962. While here he labored in Ontario and surrounding areas, with each summer being spent in tent work for six to eight weeks. He moved to the USA in 1972, first making his home in the vicinity of Barrington, NJ and then in Hartford, CT. He labored in the gospel in tents and halls, as well as new areas during this time. He lived for a short while in Ohio but later moved to upstate NY where he continued to serve the Lord and his people. In later years, due to health issues, he moved to Jackson, Michigan to be closer to his daughter and son-in-law, Doug and Jan Losey.

His family consisted of three sons and two daughters: Ken, Jan, Paul, Doug, and Lois. His wife, Margaret, was his faithful and constant support in all the work of the Lord. With him, she knew sacrifice so that he could be a help to assemblies throughout this land as well as others.

I first remember him when he came, as a young man with Mr. Lorne McBain, to Bryn Mawr, PA, in 1965. The series of meetings they held was a time of blessing when a number were reached, this writer among them. His gospel preaching was with power and warmth, Christ-centered and Scripture-saturated. He labored throughout North America, and also made trips to N. Ireland. His series in Newtonstewart with David Oliver is still remembered by all there as a unique time of visitation by the Spirit of God. His help was sought by assemblies and individual saints. He made no compromises to age and continued fresh and with vision all the way to the end.

He was fluent in French and was improving his Spanish, so as to be a help to Spanish speaking assemblies in N. America. He was marked by a deep interest in both the gospel and the welfare of the Lord’s people everywhere. His ministry often touched on the Offerings and the High Priestly work of the Lord Jesus Christ, warming the hearts of the Lord’s people and producing freshness in worship among them.

Despite requiring dialysis at the end of his life, he continued to be active in gospel work, encouraging younger men and welcoming their help in preaching in his area. He finished “in the harness,” active to the end. His consistency and faithfulness, burden and zeal, are worthy of our emulation. 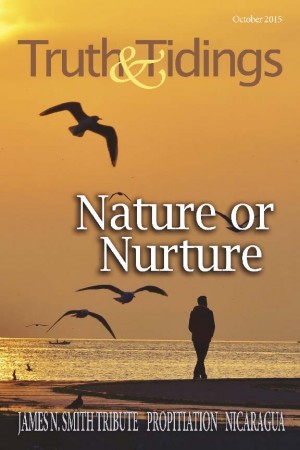