Who was the Caesar that the Pharisees’ spies were talking about in Mark 12? Their question about whether they should be paying tribute to this particular Roman emperor was, on the surface, a very valid one.

Tiberius Caesar was one of the most wicked rulers in history. He was a sexual deviant and pedophile, and was a vicious and bloodthirsty murderer who disposed of anyone he didn’t like by the most cruel means possible. The question of the spies appears to include the rhetorical observation, how could anyone justify paying tribute to such an evil man? But the spies actually had another, more sinister object to their question. They were trying to bait the Lord Jesus into a political debate.

One of the devil’s most successful a­pproaches today in destroying the testimony of Christians is getting them involved in politics.  Several years ago, Dave, a Christian friend of mine with whom I worked at a radio station, decided to run for political office. A mutual friend of ours told me about the campaign that Dave was running as he tried to win a seat in Parliament. He was dismayed that Dave would stoop to the same level as his opponents when it came to slandering each other and attacking each other. Those things, it seems, are all a part of politics, and when we think about it, they are not things that should mark any Christian. We are currently involved in an election campaign in our country, and there are issues involved that are definitely of interest to Christians. I have seen numerous Facebook posts promoting political leaders whose positions are clearly contrary to the Word of God. It would be easy to respond to those postings with contrary opinions. But would it be wise? Or would it be a trap?  Yes, it would be a trap. One of the principles that Christians in the early years of our Assemblies practiced was total avoidance of political activities, including voting. They had Scriptural authority for their position. In terms of our service as soldiers, they reminded themselves that “no man that warreth entangleth himself with the affairs of this life; that he may please Him who hath chosen him to be a soldier” (2Tim 2:4). In terms of their deliverance from the corrupt affairs of men, they reminded themselves that we should stand fast therefore in the liberty wherewith Christ hath made us free, and be not entangled again with the yoke of bondage (Gal 5:1). Those early assembly saints found that their avoidance of all things political engendered a measure of protection from many of the snares that had entrapped other Christians who failed to see the trap. Sadly, many Christians today are suffering spiritually because they did not see the trap.  The question is not whether it is lawful for us to give tribute unto Caesar or not, but whether it is wise for us to entangle ourselves in something that is sure to be a grief to our souls. It’s a trap! 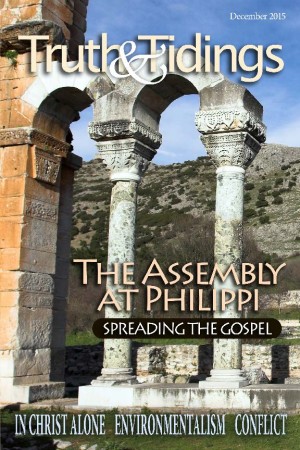