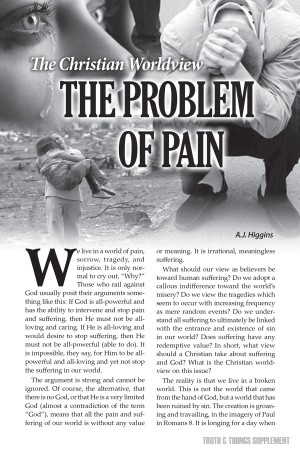 The argument is strong and cannot be ignored. Of course, the alternative, that there is no God, or that He is a very limited God (almost a contradiction of the term “God”), means that all the pain and suffering of our world is without any value or meaning. It is irrational, meaningless suffering.

What should our view as believers be toward human suffering? Do we adopt a callous indifference toward the world’s misery? Do we view the tragedies which seem to occur with increasing frequency as mere random events? Do we understand all suffering to ultimately be linked with the entrance and existence of sin in our world? Does suffering have any redemptive value? In short, what view should a Christian take about suffering and God? What is the Christian worldview on this issue?

The reality is that we live in a broken world. This is not the world that came from the hand of God, but a world that has been ruined by sin. The creation is groaning and travailing, in the imagery of Paul in Romans 8. It is longing for a day when everything will be made right again. In the meantime, tsunamis, hurricanes, tornados, disease, terrorists, and death will continue. Suffering and pain is the common lot of humanity.

The value of suffering in a believer’s life is taught clearly in Scripture. Hebrews 12 and other passages highlight for us some of the value inherent in suffering. Lives of Old Testament as well as New Testament believers also display what God accomplishes in our lives through trial and difficulty. The greater issue is the suffering of humanity in general. How do we understand this; how do we “defend” God amidst the accusations of His indifference to human suffering?

Before addressing the issue of pain and God’s existence, allow a short diversion into what may seem a very strange subject: the value of pain. There are people who are born without the ability to feel pain. They have a condition known as Congenital Indifference to Pain. At first, you might think this a great blessing. In reality, it is the exact opposite. Imagine touching a hot pan and not feeling that you had burned yourself. What would it be like to fracture your ankle while out walking and not realize it? How about stepping on a nail and piercing your foot? Pain serves a very useful purpose; it alerts us to a problem. It is our bodies’ warning system. So it is obvious that pain is valuable. It is not pain itself we want to remove from our world, but the source of the pain – all the natural disasters, the evil acts and deeds of men, the injustice and poverty which lead to suffering, grief, and heartache.

Another often overlooked value to suffering is that it actually increases our capacity for joy. Who enjoys the warmth and beauty of a summer day with sunshine more than those who have endured days of cold, chilly weather? Who can enjoy food as much as those who have been hungry? Why the exultant celebration when peace is declared? We do not celebrate it every day. Only those who have been through war really enjoy peace. Whatever pleasure we may point to, enduring the opposite increases our ability to enjoy the pleasure. Sorrow fits us for the enjoyment of joy itself.

One may cynically say, however: “But there is no prospect of joy for me. I have a terminal illness and it is only sorrow on top of sorrow.” One of the other reasons for pain and sorrow, which we will touch on later, is that it is a way for God to have us stop and put the meaning of life into context. More of that in a minute.

The question remains: “Why doesn’t God do something? Why doesn’t He intervene in our world?” There is ample evidence that He did once; and that He will again; and that at times – not often – He does even now. We are told that, in a coming day, the scepter of His Kingdom will be a righteous scepter. It really means a scepter of “rectitude,” or the setting of things straight (Heb 1:8). What a tremendous prospect.

What of the here and now? The problem comes in that we really want only limited intervention. What I mean by that is that, if God were to intervene across the board in a righteous and thorough way, He would have to deal with the tax crook, the adulterer, the drunkard, the men and women guilty of “white-collar crime,” the person who lies, the gossip, the immoral, and on and on it goes. In truth, we do not want God to get involved in the “small” things that cause pain or that are injustices, or that are things we like. We want Him to handle the big things that interfere with our lives – our heart conditions, cancers, HIV, mass murders, hurricanes, tornados, tsunamis, etc. We think that the grief of hundreds of people mourning their lost relatives is somehow greater than the grief of a wife who finds her husband has cheated on her. Or that somehow a man killing another is an injustice needing to be prevented but not that of cheating on your income tax.

In short, what we would like is a God Who is like a nice grandfather, who overlooks our “little” excesses and failures, and smiles broadly upon us. Yet He is able to prevent all the big problems in life. Those who posit the question of an all-powerful God and an all-loving God fail to add one piece to the equation: He is an all-holy God. Once He rises up to intervene, He will have to do so in holiness. His character would require intervention at every level, and for every occurrence, of evil.

God has intervened once in our world. His Son, Jesus Christ, came to earth. The Bible says that He is able to sympathize with our condition. We are told that He suffered when upon the cross. He endured pain. He endured it with a view to eventually doing away with the source of all pain and suffering – sin, and to make a new world possible in which there would one day be no death, sorrow, sickness, or suffering. One day in the future, God will intervene again, and it will eventually lead to an entirely new heavens and earth where those conditions will be banished forever.

What about now? What about cancer, pain, children who die, tragedies that occur almost daily? Do we brush all these aside with “pie in the sky by and by?” No, that would be as wrong as saying that God finds some malicious delight in watching His creatures suffer. Does pain have value for us even now? Someone has said that God whispers to us in our joys, He speaks to us in our routine of life, but He shouts to us in our pain. Myriads can attest to the fact that, amidst pain and suffering, they finally stopped the merry-go-round of life and thought seriously about why they were here and where they were going. If this life is only the vestibule into the huge mansion called eternity, it would be foolish to think that the years we spend here are all that matters. We are here to prepare for the big thing, the main event.

So God allows suffering and pain because to intervene would mean even greater sorrow for humanity. He would, by virtue of His holiness, have to deal with all the sources of pain and suffering, all the sin and injustice in our world; and that at every level, not just the “big” things. In His wisdom and kindness, He allows the pain to put our lives on “pause” so that we can consider some weighty and important matters.

To totally eliminate pain and suffering from our world, God would have only two choices: to intervene directly and remove all cause for pain and suffering, or to make men robots without a free will. The first would mean that very few of us would be here. The latter option would mean that we would be programmed robots, incapable of choice, and thus of joy as well as sorrow.

What we are then left with is that God has allowed our world to continue. He does not find joy in human suffering. The Son of God went to a cross over 2000 years ago to deal with the root cause of all human sorrow, grief, and suffering. The Bible says, “Christ also hath once [for all] suffered for sins” (1Peter 3:18). He suffered; He felt pain and knew tears. He suffered for my sins so that I could be forgiven and in heaven. But He also suffered for sin so that God could one day bring in an entirely new world where there is no suffering and sin. That world will be populated by people who have chosen to side with Him in the great cosmic battle between sin and holiness, between self and Christ.

A cautionary note is vital. It is unwise for us to point to a natural disaster or disease and to label it God’s judgment on a nation or a people. It is true that God does judge nations in time and individuals in eternity (our own nation may well be facing this), but we cannot always tell if a tragedy or natural disaster is divine judgment or not. Those who scoff at the idea would say that, if we are correct, God has made many innocent people suffer along with the guilty.

It is very possible that the book of Job is the oldest book in the Bible. If so, it raises an interesting issue. We see a man who is marked by suffering; amidst that suffering, he finds no compassion, pity, comfort, or understanding. On the contrary, he is falsely accused and maligned. He is accused of secret sin and hypocrisy. The oldest book in the Bible gives us a preview of Calvary. It also affords us an insight into suffering allowed by God. It is in the writing of James that we are reminded of the end of the Lord, and He is marked by being “very pitiful and of tender mercies” (James 5:11). God does not afflict willingly or capriciously. Every thought of God is bent toward His creatures’ blessing. He cannot do anything but good.

This is certainly not the perfect world God intends but it is the best possible world on the way to the best world anyone could ever imagine. God has not finished the story as yet; but we know the ending.