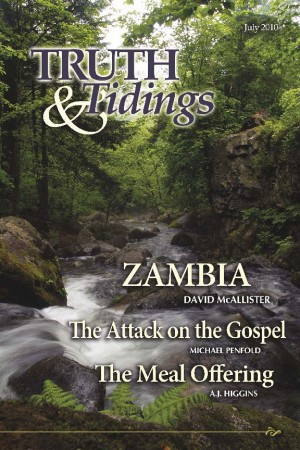 How many Bibles do you own? For very few of us would the answer to that question be “one.” We have Bibles on our shelves, in our pockets, on our laptops, and on our phones. There are Bibles for every price range. Some may have cost us a great deal, others have not cost us anything. We have a choice of versions, a choice of printings, and can even choose the color of the binding to match our shoes or hat. We are inundated by choice, and never need to be without access to the Word of God.

But imagine that this was not so. Imagine that there was only one version of the Bible available to you. Imagine that a single copy of this Bible took 10 months of skilled labor and a great deal of costly material and that, as a consequence, it cost £40, a sum of money which would have fed 10 families for a year. Imagine further that this Bible, an enormous calf-bound book, had to be carefully hidden when not in use, because the mere possession of the Scriptures in English was punishable by death. Such a situation is difficult for us to understand but, in the fifteenth century, these were the obstacles that had to be faced and overcome by any man or woman in England who wanted to read God’s Word in their mother tongue.

But at least fifteenth century believers could read the Scriptures in their own language. While partial translations of the Bible into English had been made in previous centuries, no complete English Bible had ever existed. That the need for such a translation was recognized, and addressed, owes a great deal to John Wycliffe (1320s-1384) and, though it is likely that he did not translate any of the Bible that bears his name, it is fitting that the first English Bible has become known as the Wycliffe Bible.

John Wycliffe has justly been described as “the morning star of the Reformation.” Over a century before Martin Luther nailed the “Ninety-Five Theses” to the door of Wittenberg cathedral, Wycliffe was a voice crying in the wilderness, lamenting and opposing the doctrinal error and moral abuses of the Roman Catholic Church. As a scholar at Oxford and a priest at Lutterworth, Wycliffe preached and wrote against a wide range of abuses in the Church. Primarily, he opposed Rome on three crucial issues. He objected to the authority that the Pope claimed in English affairs. At this time the Roman papacy exercised enormous power over the nations of Europe and claimed a power greater than that of king or Parliament. Wycliffe argued for the sovereignty of the English nation, but also objected that, in making these claims to super-national authority, the Pope was displacing Christ – the King of kings.

Wycliffe also took a stand against the Catholic doctrine of transubstantiation – the belief that, in the mass, the bread and wine were transformed into Christ’s body and blood. Anticipating the later reformers, Wycliffe dismissed this teaching as not Scriptural, and this dismissal struck directly at the power of the priests. Perhaps the most significant of Wycliffe’s quarrels with Rome, though, was over the issue of Scripture. In his book The Truth of Holy Scripture, Wycliffe taught that Scripture was without error and contained God’s revelation in its entirety. This meant that Scripture alone was sufficient to guide the life of the believer and the Church – no traditions of the fathers or pronouncements of the Pope were needed.

Wycliffe’s views attracted a large number of people who were equally disenchanted with the state of the Church. Individuals from all social ranks accepted Wycliffe’s teaching of the truth of Scripture. They played a vitally important role in spreading Wycliffe’s ideas beyond the universities, traveling all over England preaching to the common people. Their emphasis on preaching in English led the clergy to label them, dismissively, as Lollards, or mumblers. Whether this aspersion on their preaching is deserved or not, these men, who moved in danger of intense persecution or death, made a profound impact on English society.

But the most profound impact of Wycliffe’s life was his impact upon the translation of Scripture. The necessity for a translation followed naturally from his belief that Scripture was the one important standard for the Christian life. Wycliffe himself was, most probably, not directly involved in the translation project. Instead, the translation seems to have been made, in the first instance, by Nicholas of Hereford, and revised heavily by John Purvey. Because Greek and Hebrew were virtually unknown in medieval England, their translation was based on the Latin Vulgate. By our standards, it is a stiff translation, and the adherence to the Latin word order in Nicholas’s version especially, makes it difficult to read at times. Nonetheless, its significance was immense.

Distributing the Bible involved even greater challenges than its translation. Printing with moveable type had not yet been invented, so each Bible had to be copied out, slowly and painstakingly, by hand. This made the finished product very expensive. Few individuals could afford such a costly book, and there are records of people traveling considerable distances or paying large sums simply to hear the Bible read and to spend time with the Book.

But cost was only one of the obstacles to the spread of the Word of God in English. Wycliffe had challenged the authority on a number of fronts and, in response, Archbishop Arundel drew up the Arundel Constitutions in 1408. While the Church had always discouraged the possession of Scripture in the vernacular, these constitutions made it illegal for the first time, and introduced severe punishments for any association with the Lollards. As a result of these laws, many English Christians went to the stake or the gallows. Wycliffe was dead by this time but, rather than have him escape the stake, the Church ordered that his remains be exhumed and burned.

As well as burning Christians, the bishops burned Bibles. Any copies of the Wycliffe Bible found in the possession of Lollards were seized and destroyed. Despite this, over 200 have survived. In these Bibles we have an ample testimony to the success and importance of Wycliffe’s vision and to the determination of his followers that Scripture be restored to its unique position of authority. We owe him, and them, a debt of gratitude for their sacrifices and their commitment to the truth of the Word of God.