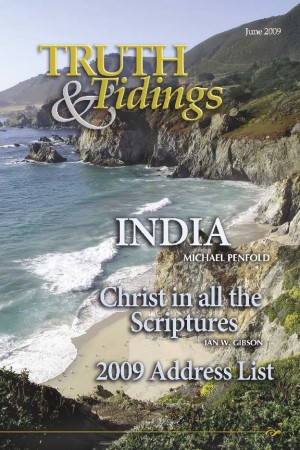 Michael Penfold and Tom West from Bicester, England visited India in the New Year. Brother Penfold gives us this report:

We spent the time in and around Siliguri, a town in the extreme northeast, not too far from Darjeeling where the famous tea is grown. Brother and sister Raghu and Lydia were commended to the work in this area some 20 years ago and have been instrumental in seeing perhaps six assemblies established, some in India and some across the border in neighboring Nepal.

The first week involved meetings all day from 8:30am to 10pm, involving two prayer meetings, three ministry meetings, a gospel meeting and question times that lasted as long as two hours at a time. Most of the believers who attended were first generation Christians from Hindi, Buddhist, and Catholic backgrounds.

Rachel Vance from Canada also serves the Lord in this part of India. She lives with Raghu and Lydia and teaches in a small primary school that they run. Through this school, they are able to reach the community with the gospel, and many of the children come to Sunday school.

Many will have heard of the persecution in Orissa in 2008. This is a state further south which we had intended visiting, but the brethren did not think it wise. However, about 15 of them took a two-day train journey and came for the conference in Siliguri, which was a delight. Ajay Chhatria, with his family, serves the Lord in Orissa and is one trustee of the Bethlehem Boys Home which looks after about 35 orphans. We were able to pass on some fellowship from the UK, USA, and Canada for the needs of this work. Two brothers, Subash and Bulgan Digal, are from Orissa and are in assembly fellowship. They have another brother who was a church pastor in Orissa until last year. He was killed by Hindu extremists last autumn and his body burned. His children will likely go to Bethlehem Boys Home in the near future. The area of Orissa where the persecution was most severe, Kandamal, does not have any Gospel Halls in it, so damage to buildings and deaths involving those in assembly fellowship were limited.

After the conference, we spent the second week preaching the gospel in Indian villages. These are remote places with very basic “houses” with tin roofs and mud floors. Many of the people are illiterate and very poor. It was a joy each night to stand by the light of a tilly lamp and preach the gospel beneath the stars to many who had never heard it before. On the final night, we went to a new village called Sanyasithan (no more than a few scattered huts),where Raghu had never been before. Through one of the local brethren in one of the assemblies, contact had been made with a Roman Catholic man. He asked if we would come and preach to his family and friends. Over 100 people turned up out of the bush and sat or stood to hear the gospel. The brethren there will be keeping up this contact and having further meetings in the Lord’s will.

Thank you for your prayerful interest in the work in India. There are over 2000 assemblies and over 1000 full-time workers in this vast land. Spread out among 1.1 billion people, the work seems so small. There are many needs, and for any with an exercise, there is plenty of opportunity for service among these dear people.