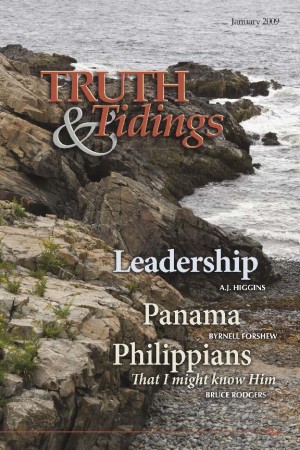 Panama means “abundance of fish.” Jesus said “Follow me, and I will make you fishers of men.”

It was November 2005 when the work in the small village of Valle Hermoso, 30 minutes west of Panama City, commenced. Since then, there have been weekly gospel meetings, Bible studies, Sunday school, teaching meetings, and a number of gospel series. The work has not been rapid in growth, but it has been steady.

At present, the average attendance for the Sunday school is 35, with over 80 on the attendance list. On Friday evenings for the Young People’s meetings, we usually expect to see fifteen teenagers and a couple of adults. At the gospel and teaching meetings, the numbers range from 25-40, with several unbelievers in attendance.

There are a number of believers who have been baptized and we were encouraged at the end of June to baptize a mother and her teenage daughter who professed to be saved in the gospel series this past February. For the past two months, we have also been encouraged as two local brethren have begun to share in the responsibilities of preaching the gospel and speaking to the children and teenagers.

With each believer, there is much confusion and false teaching that has to be sorted out. We make a real effort not to say “We believe that … ” or “I think that….” Rather, we say “The Bible teaches that …” Then, we reference chapter and verse to show them examples, principles, and truths directly from the Word of God.

Oftentimes, the believer’s past has been checkered with attendance at various churches and subjected to wrong teaching and unbiblical practices. One has to be wise and act with kindness in undoing these teachings by simply presenting the truth of Scripture, step by step, remembering that they are babes in Christ who need continual, small feedings of the milk of the Word. Please pray that there would be wisdom granted to be able to deal with the many difficulties, questions, and problems that present themselves so often.

We would also value your prayers that we would be examples to the people of what a true Christian relationship is all about and what the Bible teaches about commitment and responsibilities in marriage. For the most part, they have no example of how to treat or respect each in a relationship. What they practice has been passed on from parents and family that didn’t really know either, so you have a long line of dysfunctional relationships and so-called families. In the Sunday school, only about 10% of the children live with both of their biological parents and have a healthy home atmosphere. A little respect and kindness go a long way in reaching the hearts of these people. It’s so true that “the truth shall make you free.” Sin is a terrible master and the effects of its rule are devastating. Only the Word of God and obedience to it, starting with salvation, can bring real freedom, liberty, and peace.

The area where we presently are working, made up of four villages, has become more dangerous and the social landscape is changing. Robberies, muggings, and assaults are common on the streets. The increasing street gangs are now using guns rather than machetes to settle their differences. In the last few weeks, there have been two gun fights in the area where the meetings are held. Some of the people that would attend the meetings have to walk through these areas and it poses a great danger to them and their families. Many residents work very long hours, leaving their homes before sunrise and returning well after dark, so much of their commuting is done walking in the dark.

Please pray for the safety of the believers and unbelievers alike as they attend the weekly meetings.

Presently, there is no assembly in Valle Hermoso, but we look forward to the day when we can sit down with these dear believers and break bread. We continue with assembly teaching and the believers are gradually learning and growing. Please pray that they will continue to grow, hold fast that which they have learned, and continue steadfastly in the teachings of a New Testament assembly. In the various provinces, cities, and villages that have been travelled and the people that have been contacted we have yet to find a group of believers gathered to the Name of the Lord Jesus, following the guide of New Testament teaching.

Over the past many months, there have been a number of believers from various countries who have come to help, but after staying on for a period of time, they then return to their respective countries. On the whole, the help has been appreciated, but it gives a sense of instability to the work, and at times the believers can sense it. The Lord has answered prayer and we are encouraged that there are two couples from Venezuela that are exercised about coming and working with us full-time. As of August 2008 there have been many changes made to the Immigration Laws of Panama and now things are even more difficult than before for people seeking a visa to enter the country. There is much controversy about these new laws and how they are to be interpreted many immigration lawyers are divided on this issue and the process is not clear cut. Prayer would be valued for these couples as they seek to navigate the uncharted waters of these new immigration laws.

Please continue to pray for Panama. Yes, there is an abundance of fish, but there are also many religious lures. We preach joyfully and without shame “the gospel of Christ: for it is the power of God unto salvation to everyone that believeth.” Our work as fishers of men is simply this, “Daily seeking worshipers for the Father.”