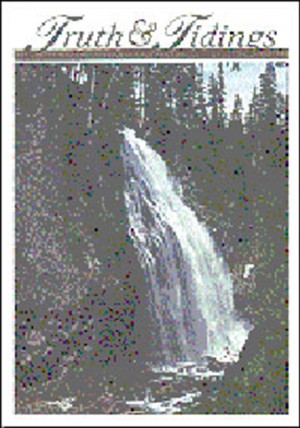 These two articles contain excellent teaching to preserve from the “charismatic” movements of the religious world.

In dealing with the above question, it is important to understand what exactly is meant by “Charismatic Gifts.” The adjective “charismatic” is transliterated from the Greek noun “charisma.” The concordance will show that this word is used in a general way of God’s free grace to sinners, and it is also used more specifically of the gifts which He has given for the advance of His work on earth. No distinction is implied in the word between the miraculous and non-miraculous gifts. In present day religious vocabulary, however, the word has come to refer to the supposed use of miraculous gifts such as speaking in tongues, prophesying, and healing. It is with this background that the word is used in this article. The question is, can we expect to see these gifts in action in our day?

It is important to observe that there are certain clearly defined periods in Biblical history when, by means of miracles, God authenticated His special message. These are: 1) The deliverance from Egypt and the journey to the Promised Land as well as its conquest, 2) The mission of Elijah and Elisha and 3) The ministry of the Lord Jesus and subsequently of the Apostles. Outside of these special periods, there were miraculous signs. Indeed, in the words directed to the Lord of Hosts in Jeremiah 32:20 it states, “…Which hast set signs and wonders in the land of Egypt even unto this day, and in Israel and among other men.” Further, the lamentation of Psalm 74:9 points to the lack of signs and prophets as a judgment from God. What is of vital importance to the present study is to observe carefully that in the stated periods, God gifted men to work miracles. The remaining miracles of the Old Testament are, with only a few exceptions, wrought by direct divine agency.

The purpose for the New Testament miraculous signs is given in Heb 2:4. It has to do with the confirmation of the message of salvation to those who heard at the beginning. We read, “God also bearing them witness, both with signs and wonders and with divers miracles, and gifts of the Holy Ghost, according to His own will.” Does not the end of Mark’s Gospel fit in almost exactly with Hebrews 2? Mark 16:17-18 indicates the signs which would accompany the preaching of the gospel. Mark 16:20 states clearly the effect of the signs, “The Lord working with them, and confirming the word with signs following.” In light of subsequent revelation, it would seem that the signs were not necessarily found in every convert, but rather amongst them as God was pleased to grant the various gifts. I Corinthians 12:29,30 gives special attention to the questions: “Are all workers of miracles? Have all the gifts of healing? Do all speak with tongues? Do all interpret?” The difference between the great commission as found in Matthew 28 and Mark 16 is important. In Mark, although applicable to all believers in a sense, it seems to apply especially to the eleven. To them and to their converts is given the promise of the miraculous signs. In Matthew, the gathered company is representative of all who would go forth with the message “unto the end of the age.” Here, significantly, no miraculous gifts are promised, but rather the assured authority and presence of the risen Lord through the age.

It is clear that there were many manifestations of special gifts in the early apostolic period, yet it is worthy of note that the Apostle Paul, who must have possessed several miraculous gifts, said nothing of any of them when he gave the great commission for “last times” to Timothy, “Preach the Word” (2 Tim 4:2). In the same context he went on to say, “Do the work of an evangelist, make full proof of thy ministry.” Note the mention of the gift of evangelist, but no mention of the sign gifts. The fact that several believers such as Timothy (1 Tim 5:23) and Trophimus (2 Tim 4:20) were not healed must be viewed with care. The gifts and calling of God are without repentance (Rom 11:29). Therefore those who possessed gifts of healing, possessed them until the end of life. Scripture infers that they were not used automatically, wherever and whenever a sick one was found. Special Divine guidance seemed to control their use. It may be that those possessing these gifts were conscious of increasing restrictions as to their use, which would account for some being left without miraculous healing. In a similar connection we observe how the Lord calmed the storms on the sea in the gospels, but although the Lord’s presence was very real to Paul during the storm of Acts 27, no divine voice calmed the troubled seas. The implication seems clear that as in the former special miracle periods, so with the New Testament one: a continuation is not envisaged.

The gift of prophecy continued during the Old Testament period until John the Baptist and then recurred as a different order after the formation of the Church in Acts 2 (Eph 2:20; 4:11). Is a continuation of this gift to be expected? Clearly it is not, for it can be seen that the use of this gift was foundational in character. Though having less authority than the apostles, the prophets received direct communications through the Holy Spirit (Acts 21:11), and these must have had their use when the Scriptures were not available for consultation. It is to be noted carefully that in those epistles that prepare saints and servants for the post-apostolic period, the great emphasis is not on a continued availability of the gift of prophecy, but rather on the use of the Holy Scriptures. In this connection, careful attention should be given to such passages as 2 Timothy 1:13; 2:15, and especially 3:16,17 where it is clearly stated that the Scriptures furnish the man of God completely, as he moves in service for God. In the Old Testament there were false prophets, counterfeits of the true (2 Pet 2:1). Scripture explains that there will, in the future, be false teachers, the counterfeit, not of true prophets, but of true teachers, for evidently nothing more than the presence of teachers was envisaged.

All this has to do with the prophets of the New Testament era. We do not look for them amongst us today. However, a careful examination of Scripture will make clear that in the period after the removal of the Church to heaven, there will be a prophetic ministry. The prophecy of Joel 2 as quoted in Acts 2:17 -21 speaks of this as happening “before that great and notable day of the Lord come.” It is also stated of the two witnesses in Revelation 11:3 that “they shall prophesy a thousand two hundred and threescore days.” Once again, for special reasons, God is pleased to introduce the gift of prophecy, and with it what may be termed the fourth period of miracles in the Bible (see Rev 11:6).

Thus it is evident that prophecy as a gift cannot be discounted merely on the supposition that it cannot co-exist with the completed Scriptures. It is correct to say that the New Testament prophets ceased as the Scriptures came more and more into focus. In His sovereignty, however, God will grant further uses of the prophetic gift, after the Church has been removed.

The gift of tongues is much emphasized in the “Charismatic” movement, and requires more space than can at present be devoted to it. It is defined in Vine’s Dictionary of NT Words as “The supernatural gift of speaking in another language without its having been learned.” The gift is described as a sign “to them that believe not” (1 Cor 14:22). Its main use in New Testament times, then, was to convince the unbeliever of the authenticity of the gospel message. There is no evidence of its continuance after apostolic times, and even in the later days of the apostles, no mention of it is made. Its miraculous character is undoubted, and thus we conclude that with the other “sign gifts,” it passed away.

Those desiring to please the Lord will not only be content to exercise those permanent gifts as received from the Lord, but, being instructed in the Word of God, will have right thoughts about the supposed manifestation of the supernatural gifts in certain circles, and will avoid all association with such.